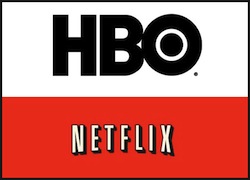 “We want to confirm our theory that because we are click-and-watch rather than appointment viewing, we can efficiently build a big audience for a well-produced serialized show,” CEO Reed Hastings and CFO David Wells said in a letter to shareholders Monday that was included in its first-quarter earnings report. “We’ll license two or three similar, but smaller, deals so we can gain confidence that whatever results we achieve are repeatable.”

According to The Hollywood Reporter, analysts expect Netflix to spend more than $1 billion in 2011 to acquire content for streaming. Twenty six episodes of House of Cards were commissioned by Netflix at an estimated $100 million.

With 23.6 million subscribers, Netflix has blasted past Showtime and Comcast, and is about 5 million subscribers behind HBO, according to the San Francisco Chronicle. Netflix reportedly outbid HBO for House of Cards, after HBO refused to license its content to Netflix for streaming.

For some time Netlix has been eyeing the premium content king; in February 2009 Hacking Netflix published a screenshot of a customer survey asking if they would be willing to pay an additional $9.99 per month for HBO shows.