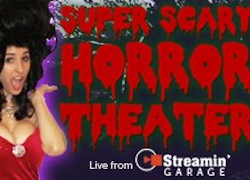 Super Scary Horror Theater is a sexy comedy horror show debuting this Friday night live from the Streamin’ Garage (a “six camera, live streaming entertainment network broadcasting an eclectic mix of programming in HD”). The series, which invokes the spirit of past genre progenitors like Elvira and Count Scary, will show classic horror movies interspersed with live interactions with the audience via chat and Skype.

The star of the show is one Ms. Dementia, played by one Kat Steel, who is currently starring in the web series Fresh Hell. She will emcee the evening’s events while she and her man servants will play a few games with the live audience. (It should be noted that in addition to being an actress and model, Kat Steel is a well-known cosplayer. For those unfamiliar, cosplay is when a person, usually a lady who’s easy on the eyes, dresses up as a favorite character and lets nerds ogle them at conventions. Such experience should serve her well in this series.)

A live show can be draining on its host, with audience interactions being unpredictable and a frequent need to vamp while thinking on one’s feet. But given her similarities to Elvira, Steel should have no difficulty filling the role.

The Streamin’ Garage has managed to establish itself quickly in the web series space. The studio broadcasts each week on YouTube and Ustream, where it has passed over two million views. Created by Elaine Ewing and Travis Rink, Super Scary Horror Theater is the sixth series launched by the network, since it began last year. Both Ewing and Rink worked with the Streamin’ Garage on previous projects.

While the show will be available on demand through YouTube and Blip, half the fun of watching is watching live. Fans of the Streamin’ Garage’s flagship show, Stupid for Movies know that the chatroom is at least as entertaining as the series. Furthermore, Super Scary Horror Theater is built around audience interaction as an integral part of the show. Without the audience the show would seem dead.

The producers plan to air the series a couple times a month and will stream on both YouTube and Ustream. (Tip, lately YouTube has had the better picture.) So, if you are looking for some sexy scary fun, tune into Super Scary Horror Theater. Better yet, bring a date and you and your significant other can curl up in front of a laptop and watch the series together. Unpleasant dreams!