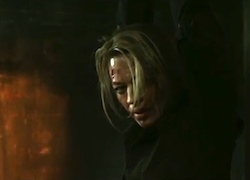 To all the readers in the audience who spent an embarrassing amount of their childhood learning every Mortal Kombat fatality possible and all the other readers in the audience who may or may not be video game enthusiasts but can appreciate when a content creator is able to successfully convert an entertainment property from one medium to another, this is the web show for you.

Warner Premiere and Machinima.com today released the first installment of the much-hyped, long-anticipated Mortal Kombat: Legacy web series. It’s good. Me and 13,000+ YouTube Likes and 4,400+ YouTube comments in the first 11 hours since the video was released can’t be wrong.

It’s nice to look at, too. Director Kevin Tancharoen did an excellent job maintaining the production value of his prologue and proof of concept that got him the gig to create a nine-episode Mortal Kombat web series in the first place.

Do you like what you see in the above? Do you have words of praise or questions for Tancharoen or the Mortal Kombat: Legacy cast? Well, you can tell or ask it to them yourself. Tahncharoen and company are scheduled to go live on Machinima.com’s YouTube channel later today to talk shop and show off their skills at the soon-to-be-released Mortal Kombat 9.