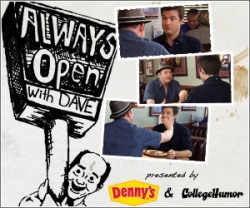 All episodes take place on premise in a live, working Denny’s restaurant, where Koechner meets up with his comedic celeb cohorts for an anything-goes, 3-minute interview. Arnett, Sarah Silverman, Amy Poehler, Will Forte and Kristin Bell are scheduled for upcoming episodes.

“We at DumbDumb are excited to be partnering with Denny’s in delivering a talent like Dave Koechner within a format that’s perfectly suited to showcase his unique comedic slant,” said Arnett and Bateman. “Going forward, we hope that Always Open establishes itself as a natural destination for many of today’s top figures in the entertainment industry. Frankly, we think this show is a grand slamwich.”

“Major forward-thinking brands like Denny’s recognize that the traditional advertising model has transformed significantly over the last few years and are embracing new ways of reaching their consumers online,” said Laura Caraccioli-Davis, EVP of Advertising Solutions at Electus. “As one of America’s most iconic brands, we are excited to team up with Denny’s to not only create great content, but to help the brand express its values and personality to a broad audience, and to truly enhance its presence nationwide.”

The first episode is currently out with the following two episodes scheduled for Wednesday, March 23 and Wednesday, April 6.