I’m no Dr. Drew. I’m not hip on all the idiosyncrasies of celebrity drug addiction or acute manic episodes. I have no idea whether Charlie Sheen could or should be involuntarily committed for awe and OMG-inspiring traditional media tirades, online video rants, and a keen social media savvy. 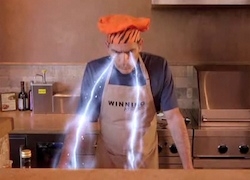 The mantra among trained professionals giving opinions from beyond the therapist’s couch seems to be, “Dude needs help.” But then there are things like this Funny or Die video, the faux beginnings of another Charlie Sheen web series that make me wonder. Are people on a high-speed train towards self-destruction usually this self-aware?

If you listen to the Sporfkul, you know the hosts of food shows can never have enough catch phrases. Sheen may be the exception that proves the rule. In Charlie Sheen’s Winning Recipes, the Robert Downey Jr. of Generation Next hosts a classic cooking show peppered with #winning tag lines of his own invention. When it’s not tired and when Sheen’s not repeating quickly-becoming-hackneyed #tigerblood, #Warlock, and #AdonisDNA-like slogans, the show’s funny.

His Rayden-eyed super power and the line about how his “hands are rated by Zagat’s” gave me a chuckle. And the entire video gave me the impression there’s still some level of calculus and engineering going on inside Sheen’s incomprehensible mind that’s influencing his madness.

He’s obviously with it enough to appreciate that what he’s doing is, in many ways, absurd. And he’s level-headed enough to poke fun at himself while getting fired from one of the highest paying gigs in television history. Maybe Sheen did have some sort of breakdown and decide to give Hollywood and the world at large the finger, but maybe he’s more in control of his train wreck than we give him credit for and we shouldn’t put Miss Ratched in control of his cigarette consumption just yet.