SideReel, Tubefilter Team Up to Curate the Good Stuff

SideReel has had a big week. First came news that the San Francisco-based online TV hub had been acquired by Rovi, and somewhat simultaneously they launched a partnership with Tubefilter to help curate their booming Web TV section. Coincidence? Probably.

So here’s how it works. Each week our editors will select four web series to be featured on SideReel in a section we call Tubefilter’s “Freshly Filtered.” Plus, SideReel viewers will now get every Tubefilter News article so they can stay atop of what’s happening in the online video world. The goal here is to help solve one of the biggest problems in an endless sea of web series—discovery of shows actually worth watching.

SideReel was founded back in 2007, building one of the largest directory of TV, film and web series, and now boasting over 10 million monthly uniques and 2.5 million registered users. And those users, according to the company, fall heavily in the 18-34 demo that watch more than five hours of TV online per week. Now they are making a serious push into connecting their audience of over 1 million visitors every day with more web originals. 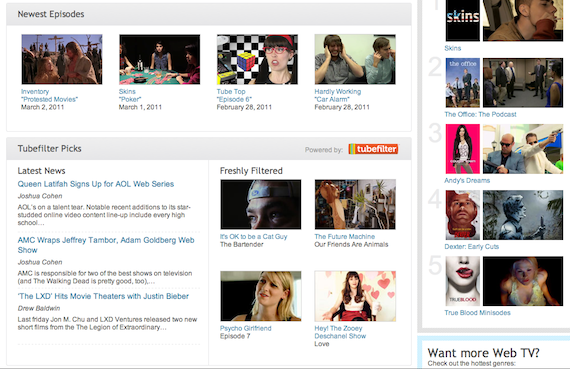 This week’s freshly filtered picks: Psycho Girlfriend, It’s OK to be a Cat Guy, Hey! The Zooey Deschanel Show and The Future Machine.

On top of the sizable job of organizing the chaotic web of TV online, SideReel figured out their audience likes it when they pick up a camera themselves. I stopped by their San Fran office this week to find it buzzing with creative types busy shooting and editing their own web series—over 20 of them—like the spoof The Jersey Sox:

Want to get your web show featured in our “Freshly Filtered” picks on SideReel? Just email us at tips[at]tubefilter.tv and remind us to check it out. (Hint: it doesn’t have to be a new series to be worth featuring, just full of awesomeness.)