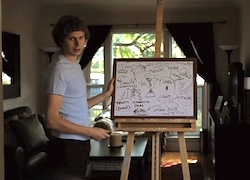 The company launched its Fall programming slate last October, which signaled a slight change in direction from its normal college-coed and twentysomething-oriented viral video fodder.

CollegeHumor co-founder and CEO Ricky Van Veen told Mike Shields at MediaWeek his production team was “trying to shift from one-off viral videos to a full slate of shows.” That strategy saw the launch of programs like Full Benefits, Hello My Name Is, Very Mary-Kate, and the celebrity-studded Star of the Week.

You should give all those titles a watch. They’re as entertaining as they are popular, and they’re very popular. Their productions also forced CollegeHumor to dive into, and take a closer look at the web series world, something it hasn’t fully immersed itself in since 2008 with Street Fighter: The Later Years.

The company is now using its experience from producing those Fall shows to launch a trio of programs for the Spring. “In the Fall, we saw our first real success with series,” says Sam Reich, CollegeHumor’s President of Original Content. “Now, we’re taking what we’ve learned and creating bigger, better shows.” Those include:

CollegeHumor’s Spring programming slate is set to drop next week at CollegeHumor.com. And judging by the press previews, the shows are going to be good. Very good. Be sure to stay tuned.