Day took her time on the couch to fight static cling, show off her guns, and display some sick knife skills by way of premiering the trailer of her just announced Dragon Age: Redemption web series live on the air. By the looks of the 30-some-odd seconds of footage, this one’s going to be good. 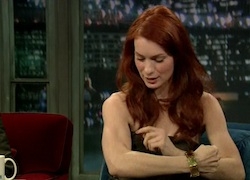 BioWare approached Day to create an online original series in promotion of the video game publisher’s upcoming release of Dragon Age 2. Day, a huge fan of the original Dragon Age title, immediately accepted the quest. She wrote, co-produced, and stars in Redemption, taking on the role of Tallis, an elvin assassin with enormous ears and a bad attitude.

There’s no word on how much acquring Day’s writing and acting talents and marketing appeal (and biceps!) cost BioWare, but by the looks of last night, the company certainly got its money’s worth. Fallon plugged the release of Dragon Age 2 along with The Guild’s Season 4 DVD.

And if Day looked comfortable talking with Fallon, that’s because this wasn’t their first interaction. Felicia schooled Jimmy on the art of WoW way back on January 21, 2009.