I told you Tom Hanks was going to be making more web series. 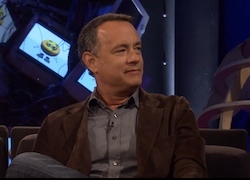 Last October, the Hollywood star with one of the most extensive collections of statuettes in the entertainment business had his Playtone Company ink a deal with Mumbai-based production company Reliance. With their powers combined, they’ll create an animated web series about an anti-dystopian future dubbed Electric City.

The deal was done sometime after Hanks discovered YouTube while on the set of Larry Crowne. Watch a few of those videos. Doesn’t it look like he’s having such a good time? Like, too much of a good time not to seriously pursue more new media projects? Well, that’s exactly what he’s done.

The show’s exactly what it sounds like. Sort of (each episode is actually closer to seven minutes than three). Barry Sobel hosts a talk show on a set that feels like a mash-up of the Ed Sullivan Theater and wherever MTV used to film Remote Control. There’s a show band, too. And Sobel has a trusty sidekick to his straight man routine in the form of Fred Willard. The duo banter, do bits, and take a page out of the ‘Things on the Internet Move Fast!’ section in Conan’s comedy playbook. The whole thing is reminiscent of Anytime with Bob Kushell, except with more industry pull and a bigger budget.

LStudio has recently been host to some prime, A-List Hollywood talent. In November, Meryl Streep appeared on a set of episodes for Lisa Kudrow’s online (and Showtime series), Web Therapy.