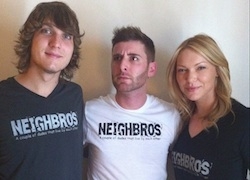 “[It’s] really, really exciting because I’ll be able to direct the pilot,” Prepon told TV Squad. “We created it. I’m so excited about it because we worked so hard on that web series it’s ridiculous.” The  series, which stars Scott Michael Foster of Greek and Jamie Jorn, is “about a couple of dudes that live by each other” and is filmed in their actual apartment building.

Prepon, who writes and directs the series, put together the series on a super low budget of favors and cupcakes. “I was the one-woman crew on it,” she said. “I direct and I edit it, and if I’m lucky one of my friends will hold a boom mic for me. Other than that it’s me and the two leads.”

The series, which launched in April of last year, has garnered only 142,035 views and 1,090 subscribers to its YouTube channel, with the highest viewed episode “Naked Tuesday” earning under 16,000 views—which goes to show that producers don’t necessarily need Fred numbers to get a network TV deal.