One of the latest entries into the lovable loser genre of web series, The Unemployment of Danny London centers on Danny London (Danny Lippin), a middle man in every sense, who inexplicably finds himself out of work when his boss and friend fires him from the public relations job that has been his life and identity for the past eleven years. Left with no other option, Danny must rebuild his life while facing obstacles from unlikely places. 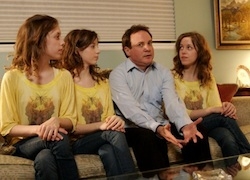 The first four episodes of Danny London are currently available online and the producers plan to release new episodes every two weeks for six weeks resulting in a 12-episode first season. The premiere features cameos by Tom Konkle (SafetyGeeks SVI) and the lovely and talented host of The WebFiles Kristyn Burtt. The series starts a little slow and could benefit from a tighter edit, but it certainly does have it’s moments.

The failing economy and its effects on the unemployed is a topic rich with comedic potential. Much like the Streamy Award-winning web series, Odd Jobs, The Unemployment of Danny London looks for the humor in what can be a difficult situation.

Take note, The Unemployment of Danny London aims for an adult audience and contains some language and situations, which may not be suitable for workplace viewing, children, or the Amish.