For three years Robert Townsend has been working as one of the more prolific and successful web series directors around, trying to do good with a number of projects with socially progressive non-profit One Economy.

With over 30 years in the industry, Townsend is an understated but respected player in black Hollywood. Perhaps best known for his sitcom The Parent ’Hood and film Meteor Man – at least to me! – Townsend continues to work, making documentaries and films, most recently directing and producing a number of successful web series, including Diary of a Single Mom and the upcoming Los Americans.

“It’s for the web but we’re trying something different,” Townsend said in an interview.

For Townsend, these series, targeted at multicultural audiences, are not just a job but a philosophy. Diary, whose third season premiered last week, tells the story of a single mother, Ocean (Monica Calhoun, The Best Man, Love & Basketball), who moves into a three-unit apartment with her kids. Throughout the series she faces numerous challenges, from the return of the kids’ father, passing her GED and getting evicted from her flat.

Unlike most web video, Diary of a Single Mom and Los Americans are produced and distributed by a non-profit, One Economy, an organization tasked with providing life improvement resources to underserved communities through technology.

“The most significant part for me is that it sends a message of hope,” Townsend explained. “Her situation is very real. It’s not Leave It To Beaver. It’s not the Huxtables. She’s gotta work hard. Every twist and turn there’s a new problem.” 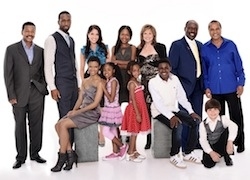 Diary is not your run-of-the-mill web series. Each episode runs a bit longer than most, about 13 minutes, meaning each season runs the length of a feature film. Well-shot and acted, it boasts some classic stars, from Billy Dee Williams to Diahann Carroll and Richard Roundtree. “The whole cast has been doing interviews, and when you get stars, they can basically give you millions of dollars of free publicity,” Townsend said.

“I’m really blessed,” he added, on getting talent to come for a modest project. “Like the last documentary I did, Why We Laugh: Black Comedians and Black Comedy: I called everybody, and Bill Cosby calls me back and says, ‘Hey man, do you want me to do an interview for this documentary, I’m in.’ Chris Rock: ‘I’m in.’ Wayans Brothers: ‘I’m in.’”

Currently looking for sponsors and talking to TV networks about funding a new season, Diary has a core of fans, with at least 50,000 tuning into the third season premiere. Townsend credits Rey Ramsey, One Economy’s CEO, with coming up with the concept, and Cheryl West, playwright and TV writer, for bring the story to life.

The team behind it has a clear mission of social justice. When people watch the series online, they can get practical information on how to pay rent, stave off eviction and work toward getting a degree.

“We went to the housing projects outside of DC, Potomac Gardens. And we had a screening of a couple of the episodes for the community center there. You know, real people. They responded: ‘This is what we need. We need stories to encourage us. Because a lot of times people feel all alone,’” Townsend said.

Having completed post-production on Diary, Townsend said shooting just wrapped for the next series Los Americans, about a middle class Latino family whose patriarch has lost his job. Written by Dennis Leoni (Resurrection Blvd.) and starring Esai Morales (Caprica, NYPD Blue, La Bamba), Townsend promises a non-stereotypical look at a Latino family trying to make it.

“The beauty of it is we’ve never seen this kind of family on television, and now it’ll appear on the web: normally it’s got to be in the barrio, and they have no money – the stereotypes,” he said. “It brings up issues from immigration, to alcoholism, to pride in one’s culture.”

Also in development is The Discarded Boys, a film set for web distribution about a woman who starts an alternative school for teenage boys who are not wanted by the system.

“I’ve always tried to do quality work in my career,” he said, “and tried to do the right things.”