Taryn Southern Says “Keep it in Your Pants”

Earlier this week, Taryn Southern released her latest video, Keep it in Your Pants a raucous and not-safe-for-work song about a poor girl driven to the brink of insanity by her simple desire that the men around her keep it down. 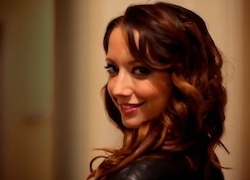 The multi-hyphenated web celebrity is no stranger to raunchy comedy having found success earlier in the year costarring in a Funny or Die produced video about the secret joy of experimentation. In fact, Southern has carved out a niche for herself as the sweet-faced girl next door whose lyrics would turn the saltiest of sailors scarlet.

She quickly rose to both Web and mainstream celebrity with her love song to a pants-suited Hilary Clinton during the run up to the 2008 Presidential election. Her video Hot4Hill was a success, which allowed Southern to erect a substantial Internet following. Since then she has stared in various online projects including Big Fantastic‘s drama, Sorority Forever, and recently in an episode of Black Box TV. For those wishing to further bone up on her past work, check out her hilariously irreverent web series, Private High Musical, which was optioned, but ultimately not picked up, by MTV as a pilot.

Her new single, Keep it in Your Pants will be part of her upcoming comedy album; however, for those who cannot wait, the single is already available for download on iTunes. It is fairly easy to find once one gets passed all of the Beatles stuff.

Lastly, in celebration of her new single, Southern is letting her fans join in on the fun by holding a contest where one lucky winner will have the opportunity to create a collaborative music video with Taryn Southern herself. The song only has to be about a minute long and include the phrase, “Where is my Goat,” which also happens to be the title of her upcoming comedy album. Full details are available by watching the contest video.

By the way, according to the California Penal code, misdemeanor indecent exposure carries a maximum $1,000 dollar fine, up to six months in county jail, and a lifetime requirement to register as a sex offender, so unless you want to show up in the national database, keep it in your pants.