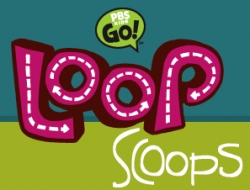 Annie Leonard, the creator of The Story of Stuff (one of the most widely viewed environmental-themed short films of all time), has collaborated with Public Broadcasting Service (PBS) and WGBH to release Loop Scoops, a new animated series which aims to get children “thinking about the STUFF in your life.”

According to the Loop Scoops website, the series presents “short, funny videos to get YOU thinking about the stuff in your life and what this stuff can do to the environment. Each Scoop tells the story of something you use or see everyday — a juice box, a magazine, an electronic gadget, a glass of juice, a pile of garbage.” Leonard, newly named the Content Director at WGBH, hopes the Loop Scoop videos will inspire kids to think in new ways and ask new questions about the provenance of the stuff in their lives, and what happens after they throw it away.

The eight episode series also provides a sneak peek into “a mysterious Top Secret project” that involves “a bunch of kids, a mysterious and powerful video game, and a ton of adventure in a magical world.” We’ll try to get to the bottom of that!