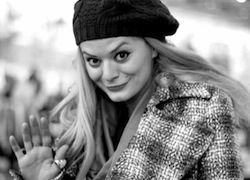 The last installment of College Humor’s Street Fighter: The Later Years hit the web in February 2008. Since then, the IAC-owned destination for college coeds and veritable online video hit factory has been a bit bearish on episodic programming.

Yes, the site is home to a handful of web series (including the buddy comedy Jake and Amir, the workplace comedy Hardly Working, and the video game talk show Bleep Bloop), but it’s been far more focused on producing viral hits (which it’s very, very good at). Until now.

In a recent conversation with Mike Shields at MediaWeek, College Humor co-founder and CEO, Ricky Van Veen explained how he’s now more bullish on the idea of web series. Veen told Shields his College Humor team is “trying to shift from one-off viral videos to a full slate of shows,” and he’s using the online video star power of his in-house cast and crew to make it happen. “Now we’ve got a regular cast [of performers] with a following,” Veen said. “And we’re trying to be less of a site and more of a network.”

So, how does being less of a site and more of a network manifest itself on CollegeHumor.com? With the release of three new original web series. Here they are:

Starring Sarah Schneider, David Young and the rest of the College Humor crew, Full Benefits plays like a version of Hardly Working with at least some semblance of a firm footing in reality. The 5-episode web series explores the awkward aftermath of coitus between co-workers and how-to (and how-not-to) play it cool.

Hello My Name Is

In addition having one helluva Seymour Hoffman, talented improver Josh Ruben has thousands of other characters in his repertoire. In this series, he gets to show them off. In every installment, a new makeup artist goes to town on Ruben. Once all the wigs, foundation, and mascara have been applied, Ruben gets to see what he looks like and creates a character based on his appearance. Pat Cassel then interviews him/her/it. Comedy ensues.

Elaine Carrol stars as a dramatic, scoliotic caricature of everybody’s favorite Olson twin in Very Mary-Kate. The series debuted over nine months ago on Vimeo and Carrol’s released at least 19 installments since then, with most receiving a very respectable 70,000+ views on Vimeo alone. Expect to add another zero to those view counts starting October 12. That’s when new episodes of Very Mary-Kate will premiere on College Humor proper.