Venus Spa is an over-the-top, tongue-and-cheek peek inside a fictional 80’s health club complete with big hair, bad wardrobe, and worse music; however, for those with fond memories of the 80’s, the retro comedy might bring back some lost recollections of the past glory days. For others, well, those who forget history are doomed to bring back leg warmers. 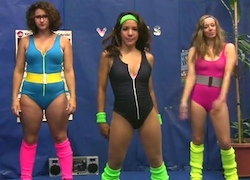 For the second season the producers have doubled the number of episodes to 26. The hope is that a longer season will allow the show to build upon and sustain its momentum and keep audiences engaged for a longer period. The first season received over 500,000 YouTube views with individual episodes averaging a respectable 25,000 to 30,000 views each. Furthermore, the series performed particularly well with males 35 and older, a demographic not usually associated with YouTube success.

Perhaps the greatest benefit of the web TV paradigm is that content can be geared toward, in some cases, very small niche groups, and offers programs a chance at success that in other cases never would have been given an opportunity.

Check out season two of Venus Spa and leave a comment below and let the show’s cast and crew know what you think of the series. Good, bad, or indifferent, all a series’s creator can ask is that one gives his or her show a fair shake.