Travis Betz, aka ‘The Receptionist’, Wins Kia’s Search for Next YouTube Star 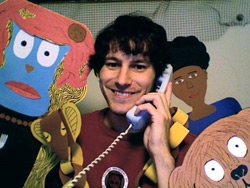 We’ve always been a little skeptical about sponsored online video contests with cash payouts, especially when the decision on the winner is in the brand’s hands. But when Kia Motors launched its Who’s Next? reality web series to find the next YouTube star, we took interest. This one didn’t have nameless judges, but instead tapped well known YouTube creators SMOSH, LisaNova and ShayCarl to sift through all the submissions of would-be stars.

Today they picked a winner. Down to two finalists, it was Travis Betz, creator of the channel The Receptionist on YouTube, who walked away with the oversized prize check for $10,000. The campy final episode of the reality series is above, complete with LisaNova hamming it up as an overdressed reality show hostess—proving the YouTubers still keep it loose and weren’t turning stiff corporate shills just for a paycheck.

Betz has been on the web video map before, having had 10 episodes of his Receptionist series commissioned by Comedy Central for Atom.com back in May of 2009. The series of videos had actually launched on YouTube back in 2006, and after a little hiatus in the middle, now totals 96 videos in all.

We asked Betz whether he’s noticed an uptick in viewership since making on the Kia series. “Absolutely. I have been very fortunate to have amazingly dedicated fans, but since the contest I have noticed that the fan base is expanding,” said Betz. “More views, more comments and more subscribers. It’s very cool. Nothing is more exciting than introducing your work to wider audience. Of course, none of this would have ever been possible with out the people who have been with me since the beginning.”

He also added that YouTube is the place to be for building up an audience for his online video creations. “I’m also an independent filmmaker, and so my YouTube audience has been a great supporter of my other works,” Betz added. “I think YouTube is a great way to build up a fan base, but it is also an incredible amount of work. I’ve been at this for four years now and I still work my butt off to get my stuff out there.”

He still has a ways to go to crack the Top 100 most subscribed on YouTube, but since the contest began he’s tacked on over 7,000 subscribers to put him over the 32k mark. Total views on his videos (on YouTube) are just over 2.3 million. Not bad at all for a guy who actually makes his videos while at work as, you guessed it, a receptionist.

So what is Betz going to really do with the $10,000 prize check? “I also need stupid little things like, shoes, contacts, brita filtes…I know, boring,” he told us. “I will be getting a new laptop though! And finally I will be putting some of it into promoting my new feature film coming out next year, The Dead Inside.”