The Fine Brothers just released a whopper of an interactive video adventure (above) on YouTube, American Idol Interactive Experience. This follows a successful release of their last interactive, Lindsay Lohan’s courtroom drama, and puts the Brothers into my elite list of creators that have effectively used YouTube’s annotations to deliver a user-navigated storyline—alongside other standouts ChadMattandRob (The Birthday Party, The Time Machine) and SecretSauceTV (Interactive Hot Tub Girl).

No major pop culture phenomenon is safe from The Fine Brothers. Their LOST action figure parodies were so popular that it’s all but certain that they were ripped off by none other than ABC itself last year. With FOX’s megahit American Idol set to announce their newest judge tomorrow now that Ellen decided to part ways, it’s about as topical as you can get this week. 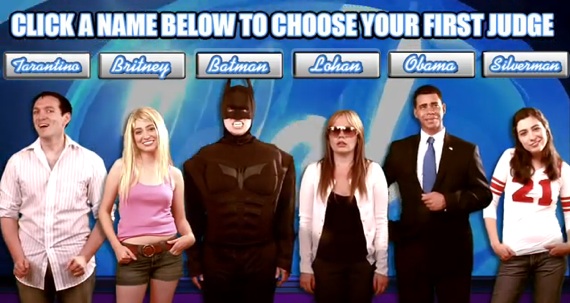 With the big announcement of the new American Idol judges coming tomorrow, we’re proud to release yet another step towards innovation in interactive experiences online (past ones include 8-Bit Twilight Interactive & Lindsay Lohan In Court Interactive). This time, we put you in control of creating your own Idol judging panel and watching them judge a singer’s performance in the……. American Idol Interactive Experience

You get to choose between 6 different judges including Barack Obama, Lindsay Lohan, Britney Spears, Quentin Tarantino, Sarah Silverman, and Batman. Pick any 3 you want and get your very own custom video! There are 20 possible videos in total….feel free to watch them all!

In all some 57 distinct videos were needed to thread this all together, with 21 primary videos to choose from. The project took over took over 13 hours to just upload and link together, according to the Brothers. Benny Fine plays host Ryan Seacrest while brother Rafi plays Tarantino. They even tapped arguably the best Obama impersonator around with Alphacat playing the smooth talking President.

Not to rest on their laurels, the Brothers say they are taking this one a little further than their previous interactives, where “the most popular judges as decided by user comments will come back in a new video series to judge user generated videos.”