Monday, October 4th at 11PM EST, the long awaited web series The Resistance will make its debut in a most unlikely place, cable television.

Syfy will air the series as a one hour special in place of its Ani-Monday animation block. This might be the first time a series created originally for the web will first premiere on TV. 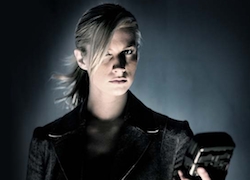 The cable network will package episodes of The Resistance web series and air them back to back, along with approximately 9 minutes of behind the scenes footage in order to reach the 44 minute television runtime.

Following the TV broadcast, the series will revert to online video form. Viewers will be able to watch The Resistance in two parts on Xbox Live, Hulu and other distribution channels before it eventually lands on YouTube in four- to five-minute installments. If the series performs well, Starz will greenlight the program as a TV show or web series, and possibly even develop the property into a feature film.

The Resistance director, Adrian Picardi explained the genesis of the project and the partnership with Starz over e-mail:

The Resistance first got started after I had met up with Scott Bayless and Eric Ro back in late 2007. We decided to partner up and form a company called Northern Five Entertainment. Scott Bayless really helped giving us the tools and resources we needed to create The Resistance trailers and from those trailers we were approached by Ghost House Pictures and Starz Media.

When the first Resistance trailer debuted on YouTube in December, 2007, it promised to be a stylistic, action-packed show. Subsequent trailers only heightened the anticipation; however, as the months rolled on, the likelihood that the series would ever air seemed less certain. In 2008, Starz picked up the series and had it re-shot with better equipment and a budget rumored to be in the low six figures. But that had been the last word we heard from the producers about the series’ fate, until now.

The show’s storyline follows Syrus Primoris (Adrian Zaw), a chemist, who in exchange for absolute power provides the only known suppressant for a deadly plague. Opposing the tyrannical rule of the would-be world savior is Lana (Katrina Law), leader of the Aurordecan Resistance Movement.

While The Resistance is hardly the first web series to make the leap to television, it might be the first to do so by skipping its online debut entirely. Starz Media’s newfangled distribution and marketing strategy for the show further blurs the lines between online and traditional content. It also begs the question, “If it first debuts on television, can it still be called a web series?”