That’s A Rapp: ‘World Full Of Nothing’ Swings At Teen Suicide 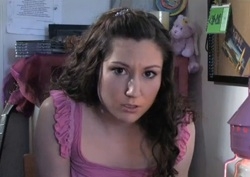 Issue-based shows always have it tough. When revolving around one subject repeatedly, how do you expect to keep an audience interested in the interim between episodes?

World Full of Nothing as a web series pretty much did everything it could to make their lives more difficult. First, this was a film, originally, which won a few film festival awards for director Jesse Pomeroy. Now it’s been re-edited and broken up into episodes to try and have a life on the web. Then, the issue this show revolves completely around is that of teenage suicide, specifically creating a secenario in which a teenager’s suicide broadcast on the web sparked a trail of copycats.

Supposedly, the trailer seems to suggest, we will be having an FBI profiler and a web predator both racing to find another one daring people to find some reason for her to continue living, with talking heads interspersed throughout utilizing this wave of suicides as fodder for their sound bytes.

In the first two episodes, it utilizes the style pioneered by lonelygirl15 in the vlog portions – that of copious amounts of jump cuts, of young people speaking directly into the camera, acknowledging the audience, etc. While this could be used to great effect—The Guild, anyone?—I don’t feel that World Full of Nothing does, other than for the shock value of the first scene.

On a serious note, if you’ve been thinking about suicide, stop reading this mindless review and go here.

Making a good film about things happening on the Internet is extremely difficult. Making a TV show, near-impossible. And making a web series about it isn’t exactly a piece of cake. Your average YouTube comments section will show how quickly viewers will dismiss something, or create resentment toward producers/directors who try to show they’re “with it” the way a father would try to talk to his daughter about Lady Gaga. There’s absolutely no acknowledgement thus far of any sense that the creators have a healthy knowledge of the Internet, other than a) People can film stupid things and post them online, and b) People will watch videos of those stupid things being done.

World Full of Nothing so far hasn’t created a character that I genuinely want to follow. It might be my own personal feelings on suicide, or that the profiler and the web predator – despite a six-minute-ish pilot and a second episode that’s a bit longer – haven’t even shown up on screen yet, and are only briefly featured in the trailer. The show hasn’t told me who I should be care about, and who is simply around for flavor.

In what little I’ve seen of Rachael – the fifteen-year-old girl who wants people to give her a reason to live – I honestly didn’t like her. The first video she makes, without giving any sort of backstory, any sort of reason, just seems attention-starved. The second episode, she completely contradicts herself tonally and calls those who’re killing themselves publicly “idiots,” despite confessing that she’s thinking about it – y’know, publicly. And this, ultimately, is the pitfall of trying to break a film up into an episodic form. For all I know, the very next episode we find out the sort of horrible upbringing she’s had, constant bullying at school, and she’s going public to cry out for help.

What’s more, we’re two episodes in, and the supposed premise – Rachael wanting people to give her a reason to continue living, the web predator and profiler chasing after her – hasn’t even begun, yet. What’re we waiting for?

The news clips, which are supposed to serve as the thematic underpinning to the show, are seriously heavy-handed. Yes, talking heads are typically sensationalist hacks. Yes, they will make unrealistic demands that will create a chilling effect on free speech. Yes, superchurch ministers will make a national come to Jesus talk. We get it. That the acting in those news show clips feel wooden and forced only makes them seem to drag on even longer.

As much as I have a dislike for Michael Moore’s similarly heavy-handed (and in many ways, willfully deceptive) style, he pretty much already covered this – and did it better – in this clip of Bowling For Columbine.

I don’t believe that World Full of Nothing grabs the emotional truth – and it certainly doesn’t in the first two episodes. If I’d gotten to see a little bit more, I may think otherwise, but unfortunately, there are very few people who would give a show three full episodes to get hooked.

Win, Fail or Trainwreck: This doesn’t really go into any of these categories. It’s constructed well from a production standpoint. There aren’t any glaring errors (though, in the vlogs, they don’t commit to the style; how do you zoom in on a character who is supposedly recording it by herself?). The acting doesn’t make me want to pull my hair out, but it isn’t grand, either, the cinematography is fine, and the direction doesn’t offend, though it seems to really want us to be shocked.

It’s just sorta there, not doing much (should ‘Sorta There‘ be a review category?). If you’re feeling morbid, you might find some of the suicide montages entertaining, but then there’s probably something wrong with you, anyway.