Apologies to any sports fans outside the Greater Los Angeles Area, but Kobe Bryant might be likable again. 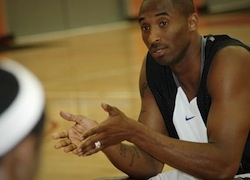 So, while the King is taking some heat, it’s a good time to for Bryant to gain positive press. Which brings me to the Hollywood Reporter’s announcement of the upcoming web series, Dream Makers: Kobe Bryant.

Produced by Endemol USA, the eight episode series is “set at the Kobe Bryant Basketball Academy, where Filipino kids get to learn lessons on and off the court from the Lakers Legend.” Endemol is currently pitching the program to sponsors and distribution outlets around the globe. For now, the program is scheduled to debut in the Philippines and culminate in a one-hour TV special.

Dream Makers should be great marketing for the Bryant brand. Expect to see a version starring Tiger Woods a few years down the road if the program is a success.