Chris who? That’s the question the show’s producers and Comedy Central have been trying to answer in the weeks leading up to Big Lake’s premiere. 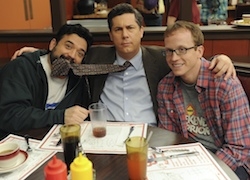 Gethard is a UCB regular, whose schtick “revolves around telling his mother illicit, inappropriate anecdotes from his childhood, tales from the bayous of the Garden State, and geeking out on everything from X-Men to amateur wrestling to Daryl Strawberry.” Despite a strong following in New York City’s comedy scene, Gethard’s still a relative unknown. He doesn’t yet have the name recognition to land appearances on Kimmel, Fallon, or Ferguson. So, instead of making the late night talk show rounds to garner publicity for Big Lake, Gethard made the rounds in online video.

The videos certainly don’t have the same reach as an appearance on late night TV, but with more than 42,000 views on Gethard’s Funny or Die short and a few hundred likes on his episode of Hardly Working, at least a few people know the name Chris Gethard that didn’t recognize it before. Once the ratings are in for tonight’s Big Lake premiere, we’ll see if making the online video rounds was worth the trip.