Has it been a year already? Once again, Comic-Con week is upon us and this year looks like it’s going to take last year and blow it out of the water in terms of web series representation. What’s unique this year are the amount of off-site events happening during Con that you can attend even if you don’t have a Con badge; we’ve made note of them below (Full disclosure: I am producing one of the off-site events. Just like last year, here is a list we’ve whipped up to help web series fans fill out their event schedule for the 4-day geek-out spectacular.

(We’ll keep updating this list as we hear of new events or schedule changes. Check back often.) 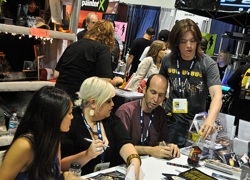 (Throughout the day):The Guild The Guild booth, #4201, listed under “Signal Fire Studios/The Guild.” Signings with the entire cast every day (2 signings on Thursday, Friday and Saturday). DVDs, T-Shirts, posters and photos for sale. (See: The Guild at Comic-Con UPDATE)

2:00-7:30 PM: Safety Geeks: SVI 3D Safety Geeks: SVI has 200 free 3D glasses available to people who visit where it is playing continuously on a screen at the table. They will also have web series Invention with Brian Forbes pics and material. Jonathan Nail from Solo: The Series will be joining the table Friday. Autograph Area AA20 Thursday, Autograph Area AA19 Friday and Saturday (See: The State of 3D Web Series as Seen through ‘Safety Geeks’)

11:00-12:00 PM: The Red vs. Blue Infiltration Join Geoff Ramsey (Grif), Kathleen Zuelch (Tex) and Gustavo Sorola (Simmons), the animators and voices of the mega-hit comedy series based on the blockbuster video game Halo, as they chat with you about Machinima, journey through the worlds of Blood Gulch and beyond, sneak peek an upcoming never-before-seen episode, (hopefully) answer questions from the audience, and more! Room 25ABC

3:00-4:00 PM: Masters of the Web Hollywood Writer/Producer Roberto Orci (Star Trek 2, Cowboys & Aliens, Transformers, Star Trek, Alias, Mission Impossible 3) and writer/director Edgar Wright (Shaun of the Dead, Hot Fuzz, Scott Pilgrim vs the World) moderate and AMC Theatres Blog Editor John Campea (AMCTheatres.com/network/scriptscreen) hosts a panel of the most popular movie website personalities as they come together to discuss how New Media has influenced moviemaking and marketing, what it takes to run a popular site, and much more in a panel discussion and Q&A session. The panel consists of Jen Yamato (former senior editor of Rotten Tomatoes, now writing for Cinematical, Hitfix, Film.Com and FEARnet), Edward Douglas (Coming Soon.net), Vic Holtreman (Screenrant.com), Mike Sampson (Joblo.com), George “El Guapo” Roush (Latino Review.com), Erik Davis (Cinematical.com), and Devin Faraci (CHUD.com). Passes to the annual, highly anticipated “From Dusk til Con” party will be given out to a few lucky attendees, and one attendee will win a pass good for one year of free movies at any AMC Theatres location. Room 32AB

4:30-5:30 PM: Digital Comics Now Digital comics are happening right now. A panel of the best and brightest in the new wave of digital comics engage in a wide-ranging discussion of everything from comics on the iPad and iPhone to digital comics on the web and day-and-date-releases. This is your one-stop panel for all the latest digital comics news! Panelists include David Steinberger (CEO of comiXology), Micah Baldwin (CEO of Graphic.ly), Michael Murphey (CEO of iVerse), and Wade Slitkin (CEO of Panelfly). Moderated by Chip Mosher (marketing director, BOOM! Studios). Room 4

5:00-6:00 PM: Childrens Hospital Check out the Childrens Hospital panel and hear from the show’s creative team led by Rob Corddry (Hot Tub Time Machine, The Daily Show with Jon Stewart), Jon Stern (producer of The Ten and Scotland, PA), and David Wain (director of Role Models and Wet Hot American Summer). They will be joined by members of their ensemble cast of comedic heavyweights, including Lake Bell (How to Make It in America, It’s Complicated), Erinn Hayes (Parenthood, Worst Week), and Rob Huebel (I Love You Man, Human Giant). Childrens Hospital explores the emotional struggles and sexual politics of a group of doctors charged with healthy libidos. Their dedication to their personal lives is relentless, interrupted only by the occasional need to treat sick children. 25ABC (See: Childrens Hospital All Grown-Up On Adult Swim)

6:30-7:30 PM: From the Computer Screen to the Silver Screen Learn how to build online audiences for your independent comic, film, and TV properties! With the spectacular success of indie projects like Sanctuary and Riese, independent producers are starting to use the web to break into mainstream media on their own terms. But how do you leverage that medium to turn your story into the property that all the studios want to acquire? It all comes down to understanding your audience. Social networking experts Matt Toner and Jessica Leigh Clark-Bojin (Zeros 2 Heroes Media), content creator Kaleena Kiff (Riese the Series), private investor Keith Turner (Meridian Capital), and digital distributor Jonathan Ford (Content Film) reveal some of the tricks of the trade that will help you get a leg up in making your web series a mainstream success. Room 4 (See: ‘Riese’: Steampunk Epic Coming to SyFy.) 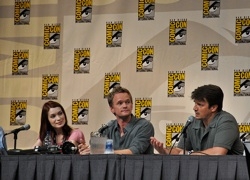 7:30PM: Diggnation LIVE! Kevin Rose and Alex Albrecht will be hosting a LIVE Diggnation episode taping. (See what you missed at SXSW this year.) Everyone is invited, and it is sure to be an amazing party. DJ Mike Relm will be performing, with appearances by the iFanBoy and The Totally Rad Show personalities. More details at Revision3. House of Blues, 1055 Fifth Ave. San Diego, CA 92101

3:00-3:45 PM: The Joss Whedon Experience Every year Joss Whedon, the creator of Buffy the Vampire Slayer, Angel, Dollhouse, and Serenity, comes to Comic-Con to give fans a wide-ranging and digressive look into what’s keeping him busy. Join Joss and a few thousand of his closest friends for the Q&A. Spoiler Alert! Ballroom 20

5:00-6:00 PM: Girls Gone Genre: Movies, TV, Comics, Web Meet and talk with women who write, read, game, and perform in arenas that are historically and statistically dominated by men. What’s it like to try and get a job in a field where most of your competitors and colleagues are guys? Can women write men, and vice versa? And what happens when traditionally “male” genres are reinvented by female writers and embraced by female fans? Sex and the City it ain’t! Meet the women who like to play with trucks and Barbies…and Wolverine action figures. And flux capacitors. Featuring Felicia Day (writer/producer, The Guild; actress, The Guild, Buffy The Vampire Slayer, Dr. Horrible’s Sing Along Blog), Kathryn Immonen (writer, Patsy Walker: Hellcat, Runaways, Heralds), Laeta Kalogridis (screenwriter/producer, Shutter Island, Ghost in the Shell, Avatar), Marti Noxon (screenwriter/producer, Buffy the Vampire Slayer, Angel, Mad Men, I Am Number Four, Fright Night), Melissa Rosenberg (screenwriter/producer, Dexter, The Twilight Saga), and Gail Simone (writer, Wonder Woman, Birds of Prey). Moderated by Io9’s Annalee Newitz. Room 24ABC

7:00-8:00 PM: RiffTrax Live Michael J. Nelson, Kevin Murphy, and Bill Corbett (RiffTrax.com, Mystery Science Theater 3000) return to Comic-Con to perform another live, hilarious riff to a classic short! The panel is moderated by Veronica Belmont (host of Tekzilla on Revision3 and Qore on the PlayStation Network). Join the riffers for fun, laughs, and the latest news from RiffTrax.com, the site where MST3K-style humor meets mainstream movies, TV shows, and vintage shorts. Room 6DE

7:30-8:30 PM: Machinima: The Artform and Opportunity Future filmmakers and animators are embracing Machinima as a way to make movies they otherwise couldn’t create, and with unprecedented success! Machinima has matured as an artform and an exciting storytelling medium. Panelists Hutch (Machinima Respawn), Adam Kovic (Inside Gaming), Khail Anonymous (Critical Flaw), Lyle Burress (Sanity Not Included), Ralph Sanchez (Dragon Age: Warden’s Fall) and moderator Jeremy Azevedo share the why and how of their accomplishments. Also, learn how Machinima.com can help you “Greenlight Yourself!” Room 4 (See: Machinima Goes Epic With ‘Dragon Age’

7:45-9:15 PM: The Totally Rad Show: Live Hosts Alex Albrecht (Diggnation), Dan Trachtenberg, and Jeff Cannata (Weekend Confirmed, Reviews on the Run) bring their Webby and Podcast Award-winning geek culture show back to Comic-Con for the third straight year. Join the guys for an explosion of movie, video game, TV, and comic book news and reviews, and see what makes this Revision3 show such an Internet phenomenon.Room 5AB

10:00-11:00 AM: Spotlight on Carla Speed McNeil Comic-Con special guest Carla Speed McNeil is best known for her creator-owned title Finder. A few years back, Carla took new stories of Finder to the Internet, and the result was an Eisner Award for best Webcomic of 2008 and a new series of reprints from Dark Horse. Carla talks about her work and what’s next in this Spotlight panel. Room 3

2:00-3:00 PM: The Guild Now in its fourth season, The Guild is a multi-award-winning independent web series that started on YouTube and has grown into a worldwide phenomenon with over 50 million views, a groundbreaking distribution deal with Microsoft, a chart-topping song and music video, and a comic book from Dark Horse Comics. Writer/producer and Comic-Con special guest Felicia Day, producer Kim Evey, director Sean Becker, and the cast of The Guild including Wil Wheaton are on hand for a discussion and Q&A, along with the debut of never-before-seen content and other surprises. Indigo Ballroom, San Diego Hilton Bayfront (See: ‘The Guild’ Season 4 Takes Off Today) 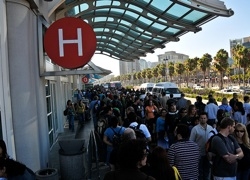 3:30–4:30 PM: Red Faction Armageddon: How to Build a Transmedia Universe The biggest event in the mythology of one of the world’s most popular video games is also a flashpoint in the launch of the Red Faction multiplatform universe. Get exclusive information about it and pick up tips on world-building and game concept development, along with info about the partnership with Syfy in this in-depth Q&A with creator Danny Bilson (EVP Core Games, THQ), Lenny Brown (director IP development, THQ), Hollywood’s leading Transmedia producer Jeff Gomez (Avatar, Transformers, Tron Legacy, Men In Black 3D), Alan Seiffert (SVP, Syfy Ventures), and Erika Kennair (director, development, Syfy). Room 9 (See: Jeff Gomez: Transmedia is a Responsibility Not A Privilege )

3:30-8:00 PM: Celebrate the Web: San Diego In celebration of scifi/horror/fantasy/gaming web series and the genre fans that will converge on San Diego during Comic Con, web series multi-hyphenates Stephanie Thorpe, Taryn O’Neill and Jenni Powell, in conjunction with Kim Evey and Jenni Powell’s Celebrate the Web, present Celebrate the Web: San Diego. The event will be a live-streamed forum with genre web content creators and talent from web series including Universal Dead, Continuum, Riese, After Judgment, GOLD: Night of the Zombie King, A Good Knight’s Quest, The Mercury Men, I<3 Vampires, Chad Vadar, Chick, A Comicbook Orange and The Jeff Lewis 5 Minute Comedy Hour. The Bristol Hotel ‘City Scene’ Conference Room (2nd floor) 1055 First Avenue (See: Celebrating the Web and Stepping Back From the Ledge)

5:00-6:00 PM: Webcomics Lightning Round The forces behind Webcomics.com, Scott Kurtz (PvP), Robert Khoo (Penny Arcade) and Brad Guigar (Evil Inc), present a primer on webcomics from all aspects: creative, technical and business. Each panelist will answer in thirty seconds or less, without repeating previous points, so expect a fast-paced tour of the subject from start to finish. Room 8

7:30-8:30 PM: Atom.com: World Premiere of Legend of Neil, Season 3 Atom.com is back with Sandeep Parikh (The Guild) for another groundbreaking season of Legend of Neil. See the world premiere of new episodes from Season 3 and stay for a discussion with Sandeep, series stars Tony Janning, Mike Rose, Scott Chernoff, Eric Acosta and everyone’s favorite fairy Felicia Day (The Guild)! Moderated by Alex Albrecht, of Diggnation. Room 7AB

Got something web series related to add? Let us know in the comments and we’ll add it.

Photos courtesy of The One True Bix