‘The Web.Files’ Bites Into ‘Vampire Mob’ 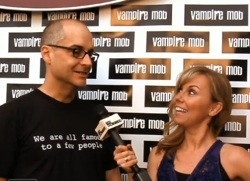 On this week’s episode of The Web.Files, host Kristyn Burtt takes another trip down the red carpet with the cast and crew of Vampire Mob. Created by Joe Wilson, the series stars John Colella, Reamy Hall and comedy legend Marcia Wallace. As stated in the interview, the inspiration for the series came to Wilson while he was working as a private investigator on a mob related case at which point he realized vampire and mobster go together like peanut butter and vampires. Who knows? If the series is a hit then it could spawn a number of copycat vampire hybrid stories. Vampire cowboy, vampire Pilates instructor, vampire actor (wait, they already did that one), the possibilities are endless.

Vampire Mob is the story of Don Grigioni, your average vampire slash hit-man who, after turning his wife – he got hungry one night – has to deal with the fact that she, in turn, turned her mother, who now is moving in with them for all eternity. The series has taken a unique approach to its release schedule. Each episode has a view ransom, a certain threshold of views that once reached, triggers the release of the next episode. It is a novel approach, which will certainly incentivize die-hard fans to spread the word and expedite the release of new episodes. The first season consists of six episodes with the first episode available now.