JibJab Gives You A Starring Role On ‘Mad Men’ 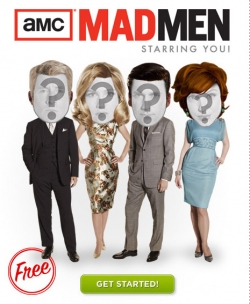 Hilarious video e-card titan JibJab released its latest piece of interactive brilliance: a new video in the theme of AMC’s Mad Men, whose fourth season is slated to launch July 25.

The card, Mad Men Starring You!, encourages participants to upload their head shots, then transforms them into Don, Roger, Betty or Joan in an interactive scene. The free video makes the entire cast into the user’s own personal entourage, except this time they’re all spouting one-liners in the voices of Jon Hamm, John Slattery, January Jones, and Christina Hendricks.

JibJab, with some 1,500 cards in its repertoire (most of which are oriented around the traditional holiday schedule), has established itself as the leader in professionally produced viral videos. Its first hit, 2004 presidential election parody This Land, became a sensation, playing on The Tonight Show with Jay Leno and seen on every continent (including Antarctica), and even played on the International Space Station.

Gregg and Evan Spiridellis, the brains behind the JibJab operation, have pioneered a freemium model in which users are drawn in with with free content, then upsold on $12-per-year memberships. Investors in the 11-year old Southern California based company include Sony Pictures Entertainment and Overbrook Entertainment.