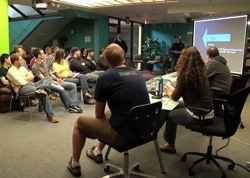 Back in the day we used to call these incubators, places where nascent co-founders could share an office, tinker on their latest inventions and ideally break out as a thriving startup. But the first dotcom rush seemed to leave the term a little passé. Now the newer breed of tech incubators like San Francisco-based Y Combinator and Boulder’s TechStars prefer “mentorship-driven seed accelerator.”

A year ago, TechStars decided to turn cameras on itself by launching its first ever web series, The Founders, which followed three startup teams through their 3-month summer program. This summer it’s Omniar, Grogger and RentMonitor that will share the focus of the story.

In exchange for a small amount of equity in their startup, the lucky founders selected for the program get some ample living expenses, offices in the colorful digs they call The Bunker and direct access to an impressive crop of mentors to help them turn their concepts into actual companies. The series does tend to feel a bit like a marketing pitch for the program, but nestled throughout are some free gems of wisdom from the mentors, not to mention a touching human side to the founders.

The patriarchal David Cohen, executive director of TechStars, gives a infamous 6-hour intro orientation, that he calls “the longest meeting you’ll ever sit through.” Startup mentor Don Dodge of Google equates the program to “being in Harvard Business School.” At the end, it all leads up to “Investor Day” which pits these startups in front of VCs and Angels managing billions in investment capital.

For season 2 of The Founders, producer-director Megan Leigh Sweeney returns bringing a crisp, tightly cut series that is remarkably watchable even if you aren’t a TechCrunch junkie. There’s a new opening credits sequence this season, a noticeably more elaborate time lapse sequence of the laptops, scratch paper and pizza that fuel a startup’s daily grind. And a sponsor, Rackspace Cloud, is on board to help support the 14-episode series.