How to Get Americans to Watch Soccer

The 2010 FIFA World Cup has begun. If you’ve caught the football fever, you already know where to watch all of the games online and on your phone. If you’re looking to catch the football fever, watching the following videos will you help you contract it: 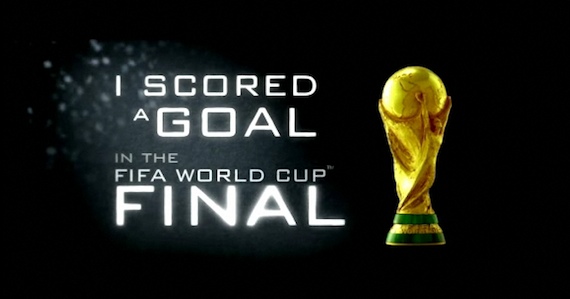 2) Visible Measure’s rundown of five of the most-viewed online video ads associated with the World Cup. Online ads from Puma, Pepsi, Carlsburg, Coca-Cola, and Nike have drummed up more than 37 million views and counting. Alejandro González Iñárritu’s World Cup spot for Nike – possibly the greatest commercial for anything in recent memory and includes a nod to its own virality around the 1:57 mark – has accrued more than 22 million views on its own.

3) Adidas’ sporty redux of the famous Mos Eisley Cantina scene from Star Wars features the likes of Snoop Dogg, David Beckham, and other famous faces from the music and entertainment industries. It speaks more to pop culture and cheeky nostalgia than the thrill of the game, which makes sense considering the label is trying to hawk its Star Wars line.

But if you’re a fan of the type of football Hank Williams Jr. sings about and want to avoid World Cup fever altogether, SlateV’s how to get Americans to Watch Soccer is the only online video you’ll need. Bill Smee and company poke fun at football, gratuitous use of cheesy graphics, corporate sponsorship, and America’s stats-obsessed sports culture all in the same breath. And to think, soccer could’ve almost been the USA’s #2 pastime.

Don’t miss a single FIFA game this month by tuning in to watch the 2010 World Cup live online and get into the tournament with Budweiser’s Bud House online reality series about 32 World Cup fanatics from around the world living together in one house in South Africa.