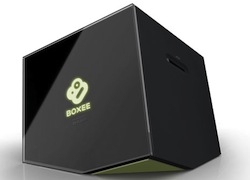 After months of build-up, and waiting, fans of the open entertainment platform Boxee finally have a date to mark on their calendars for the release of the lauded Boxee Box. The set-top box from equipment maker D-Link will help bridge that crucial gap between laptop and living room TV, putting Boxee in a head-on slugfest against the likes of AppleTV, Vudu, Roku and the latest entrant, Google TV.

The public on-sale date for the Boxee Box is set for November, the company announced this afternoon.

Earlier this week we got confirmation that the Boxee Box by D-Link will ship this November in US and Canada. We realize many of you have waited months to purchase the Boxee Box, and we know how frustrating this is. Believe us when we say that both Boxee & D-Link want to start selling Boxee Boxes yesterday.

The original plan was to have the Box out by the end of Q2 (i.e. just about now), but that time-frame proved overly ambitious.

Until the Box hits shelves, the media platform is only available for Mac and PC users through a free downloadable standalone application. But still, Boxee already has its legion of fans for its library of content-driven apps, and most online networks have either already launched their own or have one in the works. Web TV networks Revision3, Crackle, Next New Networks, KoldCast TV all have apps on the service, along with some shows themselves like The Guild, Pure Pwnage and Kevin Pollak’s Chat Show. 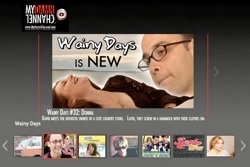 This week MyDamnChannel was the latest to launch its own Boxee app, using the occasion to debut a never-before-seen episode of its hit comedy series Wainy Days—with special guest star Megan Mullally—for a one-week exclusive.

Initially the Boxee Box release was said to be in second quarter 2010, which later shifted to the second half of the year. One commenter noted that the holdup was on chipmaker NVIDIA’s end, “for not having ready the TEGRA 2 SOC.”

The competition for the living room will certainly heat up by the end of this year, with at least a dozen internet connected set-top boxes on the market. The wild card is 800lb gorilla Google TV, which will be available on several devices later this year. Forrester Research’s James McQuivey warns that “Google TV is a bigger deal than you think.”

Either way, with its clever marketing and open platform, Boxee could make a dent in this fight. And for content creators, additional features like a built-in content payment system will help score some points.

At TechCrunch Disrupt last month in San Francisco, Boxee CEO Avner Ronen was cautiously optimistic of Google’s entry into the media center market. “If Android can find its way into set-top boxes, TVs and Blu-ray players — essentially into the living room — we think it’s a great opportunity for us, for companies like Wired, to anybody who wants to bring something into the living room.”