Auto-Tune ‘The Guild’: The Only S3 Recap You Need 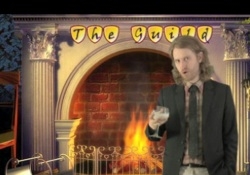 The Gregory Brothers are still the web’s reigning masters of the auto-tune. And this year’s Streamy Awards proved to be a matchmaking of two of the web’s most popular web series—The Gregory’s breakout news-politic series Auto-Tune the News and the Streamy-winning machine that is The Guild.

So after meeting in person at the Streamys, the two groups decided to team up for a little auto-tuned recap video (above) of Season 3 of the popular online gamer comedy—spoiler alert in the video if you’ve haven’t watched S3 yet!

When it came time to do a recap of Season 3, we thought we’d do something new and different. Everyone at The Guild had become big fans of The Gregory Brothers, creators of Auto-Tune the News, and we got to meet them in person at this year’s Streamy Awards where they won three Streamys and rocked the audience with their live performance and Magical Streamys Remix Video (watch it, it’s awesome) So, we asked if they would lend their talents to our recap.