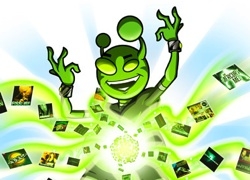 Since October 2009, SciFinal has established itself as a web directory focused on providing information and links about independently produced science fiction web series. What began as a response at frustration at the lack of opportunities to promote their own series, Steve Lettieri, Rob King, and Chris Conway started with a platform that showcased 10 shows and now, less than a year later, includes over 120 shows. The SciFinal team has always been an advocate of independent production, specifically when it comes to the promotion of scifi.

Tubefilter had a chance to chat with Lettieri about the beginnings of SciFinal, it’s latest foray into series production as well as Lettieri’s recommendations for some great scifi series fans may not yet be aware of.

Tubefilter: What inspired you to start Sci Final? What is your background in New Media?

Steve Lettieri: The inspiration for SciFinal came from us trying to think of ways to help promote our show Zerks Log. It was a challenge getting noticed by the various science fiction websites and blogs as well as from viewers because indie shows are competing against the likes of Star Trek, Star Wars, Transformers, Terminator, etc. In talking with other scifi web series producers we realized we all were facing the same issues. So we thought, what if we worked together somehow to help promote indie scifi in general? That might help our shows individually. So we had the idea and were starting to work on it. An article by Gennefer Snowfield on Tubefilter mentioning SciFinal really kicked us into gear to make it happen. We launched in October 2009. The site started with 10 shows listed. It’s been growing ever since. We have over 120 shows listed now and the number of site visitors keeps climbing week-to-week.

As far as my new media background is concerned, I’d been working as a video producer for a number of years, mainly in the corporate space, and slowly started getting involved in documentary and scripted projects (including American General: Benedict Arnold a documentary I’m co-producing with my friends at Talon Films. I was paying attention to what was happening online and knew it could be a great way to distribute content. So in mid-2008 I partnered up with friends Rob King and Chris Conway to start the production company StoryForge Labs to focus on original sci-fi for the web. We also started Killer Minnow a visual effects, animation, design studio.

Our first project was Zerks Log, which launched in March 2009 on blip.tv. We also put out an online comic set in the Zerksverse called In the Engine Room and the short film showcase The Singularium. We’re currently in production on our next web series called s01dier and are working on Season 2 of Zerks Log. Plus a few other things!

Tubefilter: If all the series on the site, which are your favorite? Or, if you don’t want to play favorites, just tell us about a couple of shows that might have slipped under people’s radar.

SL: There are so many cool and entertaining shows listed on the site. So it’s definitely hard to pick just one. Zomblogalypse is a fun zom-com from the UK. They do a lot with there low budget. The writing is pretty sharp on it. The animated show The Adventures of Humphrey & Spud is weird and amusing. And from a quality production standpoint, Trenches and Tyranny are definitely worth checking out.

I also can’t wait for SOLO, Heroes of the North, and The Mercury Men to be released! There all very different, but from what I have seen so far should be worth watching.

Tubefilter: Tell me about the process of putting together the Sci Final trailers. I know this is your second one, correct? It must be a lot of work!

SL: The trailers do take a bit of work, but it’s fun too. The first trailer got quite a bit of notice, including mentions on Wired.com and io9. We credit Anthony DeLosa, creator of the show Neighborhood Watch with coming up with the idea for us to do it. Our original plan was to release the SciFinal trailer as a response to the Super Bowl commercials that got posted on YouTube.

In terms of the process, we start by soliciting clips from the various shows, usually around a theme of some kind. The latest trailer has Chills, Thrills, and Laughs. Once we collect them all, we start the editing process. That takes a bit of time to get the flow to work. We then create some 3D motion graphic pieces to tie the sections together. Then do an audio mix and add music. This go round we’re pleased to have Ray Holycross, creator of the show Contagion on board to create the original music you hear in the trailer.

Tubefilter: Tell us more about the current project featuring Taryn O’Neill and Stephanie Thorpe. How did you come together to collaborate with them?

SL: Taryn and Steph I met through the process of getting their shows on SciFinal. They are both really active in the web series community (After Judgment, HTSAAAR, etc.) and are real scifi geeks. So really it was just connecting with them online as fellow indie sci-fi producers.

When we first had the idea of doing a hosted SciFinal show, they were quick to volunteer to be a part of it. We’re psyched to be working with them. They’re great to work with. So we’re in pre-production on a SciFinal show now. It is meant to be an entertaining, newsy look at the indie scifi scene with an initial focus on web series. We’ll have more definitive info on a launch date and such soon.

Tubefilter: Anything else we can look forward to from SciFinal in the next few months?

SL: Besides our SciFinal web series, we plan to continue adding original content to the website like our “Creator’s Corner” section. And we plan to expand the site to include indie sci-fi features and short films. We are also talking about trying to do something at ComiCon in San Diego. It’s sort of last minute, but there’ll be quite a few shows that are listed on SciFinal attending the convention, so it would be cool to be there in support of them.