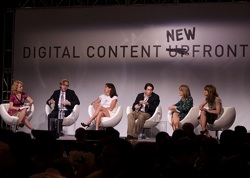 Just don’t call it an upfront. This is a more like a half conference, half show-off of influential content creators and celebs and all hoping to catch the eye of Madison Avenue brands. Digitas and its digital content arm The Third Act hosts its third Digital Content NewFront tomorrow at the Skylight Soho in New York.

Even though Shaq can’t be there in person, he still took time to make a video pitch of his web series ideas: Dunk’d, a makeover show with the NBA’s shorter players? Shaqalicious, a Shaq cooking show? Genius.

On a slightly more serious note, Daphne Brogdon, the Emcee for the NewFront, talks about FTC regulations and digital content in another video released in advance of the one-day event.

Tubefilter News will be on hand to cover the Digital Content NewFront tomorrow and we’ll have a recap of the event and which content stood out for brands in attendance. Unreleased content will be screened as brand pitches from online networks like Revision3, celebs like Seth Green with a project called URule, and a few independent web creators.