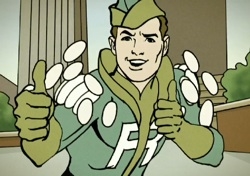 At first we thought it was just us. We’re just reading into this too far, victims of a steady diet of too much web video. But when we checked out Taco Bell’s first ever original web series, Super Delicious Ingredient Force, we had to watch it three times just to be sure. We thought there’s no way this was intentional, we were just fueled by a Quentin Tarantino neurotic observation rant—like his breakdown of howTop Gun is actually a homosexual love story. But a major brand like Taco Bell wouldn’t go there, would they?

No, they went there.

Does Taco Bell know how overtly gay this thing is? 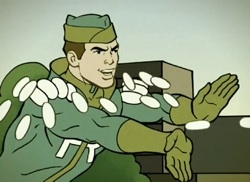 We’re pretty sure they knew what they were doing with this pardoy of the 1970’s animated series Super Friends. A team of Taco Bell super heroes— Crunch Boy, Fantastic Rice, Commander Seasoned Beef, etc.—respond at a moment’s notice to fight rivals like the “Diabolical Cruddy Combo Clan.” Of course SNL’s ‘Ambiguously Gay Duo’ must have been an equal inspiration here.

VOICE OVER: “Just then, Cruddy Burger launched a warm limp pickle he had concealed within his buns, smacking Captian Enchilanda Sauce square on the bicep.”

VOICE OVER: “In a effort to end the chaos, Fatastic Rice shot himself into the beady eyes of the Cruddy Combo Clan, temporarily blinding the flavorless foes.”

FANTASTIC RICE: “How’s that feel? You can’t even see anything. Riiiiiiiiiiiice!” 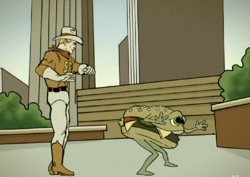 VOICE OVER: “Giving Commander Seasoned Beef a perfect opening for a well seasoned beef kick—right in the Cruddy Burger’s underbun!”

Created with viral aspirations amongst its young-male target demo, so far the first episode has cracked 220,000 views on YouTube in it first three weeks online. Two more are expected to follow.