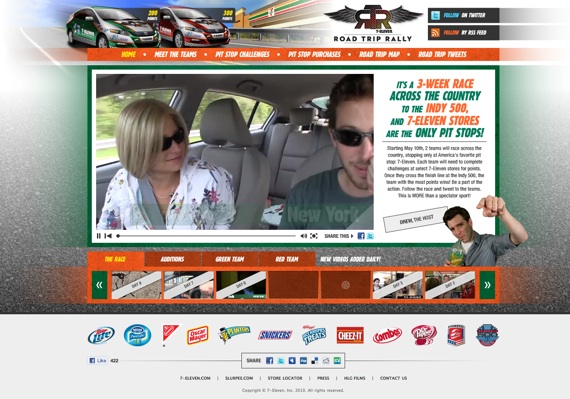 $1 million isn’t what it used to be, but in the web series culture of “favors and waivers,” it’s a fortune. Even Joss Whedon’s widely popular Dr. Horrible’s Sing-Along Blog, with its cast of Hollywood notables, came in with budget just under $300k. To scrappy indie web series creators, Madison Avenue’s ad agencies and their branded entertainment series don’t even seem to be playing in the same league.

But some of the lucky creators have embraced this new flood of ad dollars in online video, and found there’s a living to be made crafting these sponsor driven, heavily product integrated made-for-web originals. Yuri Baranovsky, creator of the 2007 hit indie comedy Break A Leg, he and his team at Happy Little Guillotine Films were one of those lucky crossovers. After pitching their concept to 7-Eleven’s ad agency with just a promo video, they were tapped to produce, write and direct 7-Eleven Road Trip Rally which launched May 10th in partnership with blip.tv. 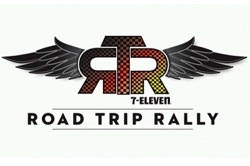 The series tracks two pairs of contestants racing across the country to the Indianapolis Motor Speedway for the Indy 500—with their only pit stops allowed are at 7-Eleven stores. Drew Lanning, an original Break a Leg cast member, hosts the series, with Baranovsky directing.

“We posed the question, ‘Could you travel from coast to coast, stopping at only 7-Eleven stores for every need, from fuel to fresh food, snacks to Slurpee drinks?’,” said Sterling Hayman of FreshWorks, 7-Eleven’s consortium of advertising and marketing agencies. “This is 7-Eleven’s mash up of The Amazing Race meets Gum Ball Rally.”

“They chose our company because of our style, quirkiness and comedy,” said Baranovsky. “Also our experience in the space. We went this way because it was a challenge for us—we were given almost free reign to create this show and we wanted to see if we could make a reality show that still feels like us.”

While reality series themselves are nothing new to the web—see Married on MySpace, Hulu’s If I Can Dream, Scion’s Reinvent the Wheels amongst others—Baranovsky notes that the next-day turnaround of footage from the road makes the show unique. That, he says, and its $1 million budget. A bevy of munchies and beverage sponsors jumped in as well, including Combos, Nabisco, Dr. Pepper, Nestle, MillerCoors, Kelloggs, Oscar Mayer, some of whom are also promoting the series on their web sites.

So far the series has racked up over 500,000 views in its first week according to Baranovsky, and it’s picking up a fair amount of local media at the show’s shooting locations. Naturally, there’s a Twitter component, with the two teams even competing for the most Twitter followers amongst them.

While non-scripted fare tends to have little if any shelf life in the entertainment business, it can pay off—for both the sponsors and the creators—if audiences latch on.

UPDATE: We heard from blip.tv with a clarification that while the overall budget was $1 million for the project, “about half” was dedicated as a media buy on blip.tv and other sites.