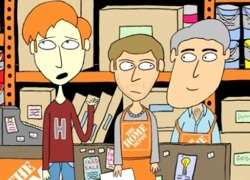 Celebrity gossip has always held a strange fascination for people…anyone picking up groceries has been witness to that. And with the advent of Twitter, celebrities have found ways to harness this drama into 140 characters or less. Celebrity entertainment site Wonderwall is seeking to harness the hilarity behind this phenomenon with it’s series Celebritweets Theater, which is an animated series that imagines the actual stories behind strange Tweets posted by celebrities. Tubefilter corresponded with Wonderwall editor Saryn Chorney, who shared with us what she felt is behind the strange appeal we have to consume celebrity drama as well as giving us more information about the Wonderwall site in general.

Tubefilter: How much do you know about the inspiration of this series? What stimulated the idea of crossing Celebrity Tweets with animation?

Saryn Chorney: We had been toying with the idea of a celebrity-driven parody of Masterpiece Theater as a video series for a while. Upon discovering KCSCougar on Buzzfeed, Wonderwall reached out to him to see if he’d be interested in working with us on bringing celebrity Twitter messages to life. The pilot episode featured John Mayer (posted above). We all loved it, and hence, Celebritweets Theater was born.

Tubefilter: How popular is the series? How have people been responding to it?

SC: Between Wonderwall and promotion across MSN.com, Bing.com and Youtube, many episodes of Celebritweets Theater attract a big audience. One of the most successful to date was a special Valentine’s Day Episode featuring Katy Perry and Russell Brand, which received nearly 300,000 pageviews total. Sites like CollegeHumor, Comedy.com, and Buzzfeed are also fans of the series. We also premiered an episode before a live audience at the Gen Art Film Festival last month, which resulted in big laughs and applause. The episode featured Adrian Grenier, who was in the audience, and he enjoyed it enough to re-Tweet it to his fans. I think the series is right on the cusp of going viral.

Tubefilter: What do you think it is about celebrity Tweets that fascinates people?

SC: Twitter provides this rare glimpse into a celebrity’s everyday life without a filter — no publicist, no media spin — just off-the-cuff, unedited snippets of their thoughts, activities, and conversations with friends and other celebrities on Twitter. That’s why Celebritweets Theater works. We take this one, unedited peek into their lives and then imagine the real story behind it the way we want to see it — be it funny, bizarre or sometimes just a little sweet and kooky.

Tubefilter: What is your favorite episode and/or the one that you think folks who have never seen the series should start with?

SC: I have a lot of favorites. Personally, celebrities mixed with talking animals cracks me up, so I love the “Taylor Swift is a Deer Whisperer?” episode. But for people who haven’t seen it yet, I might recommend “Conan Lands a Job at Home Depot”. It’s genius. The episode is so funny and clever, and it perfectly sends up the Conan O’Brien/Jay Leno debacle, which is basically the biggest entertainment news of the year thus far.

Tubefitler: Who else will be see featured in future episodes?

SC: Definitely keep an eye out for Jim Carrey. Any celeb who goes off on a “Twitter rant” is probably ripe material. Generally, we tend to pick celebrities who are in the news for their Twitter activity or those who are topical. For instance, we did a Lady Gaga episode right around the Grammys.

Tubefilter: Anything else you’d like to tell us about Wonderwall?

SC: Wonderwall.com entered the crowded celebrity online space last February and we’re now the #2 celebrity site. The site’s unique horizontal navigation ensures that it looks like nothing else out there and we are continually working to produce fresh, unique content with a smart, witty take on all things celebrity. We are also especially interested in how celebrities interact with fans online. We do this through features like our original Twitterviews, which are interviews done in real time with celebs on Twitter, as well as our weekly Celebs Gone Viral, which looks at all the videos, photos, memes and more that have spread across the Internet that week. We’ve also partnered with the People’s Choice Awards to present the “Favorite Web Celeb of the Year” award. In January, we presented the first-ever award to Ashton Kutcher. In 2010, we’ve continued to create a monthly Web Celeb gallery, where we feature all the stars who have been most active online each month, thus forming our candidate pool for the 2010 awards show. We’re also going to be launching some new video series later in the year that we’ll be sure to keep you updated on.