As Lisa Kudrow’s ‘Web Therapy’ Heads to TV, Who’s Next? 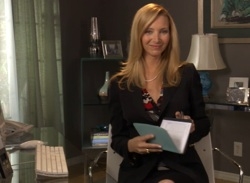 Just one day after Lisa Kudrow’s comedy web series Web Therapy bowed its third season on Lexus-sponsored entertainment hub LStudio.com, news came today that Showtime has picked up the web series to be aired in half-hour segments later this year, according to a report by The Hollywood Reporter.

“It’s a great little coup for us.” said Showtime entertainment president Robert Greenblatt about the webcam therapy series to THR. The format of the series will reportedly see three of the 45 existing web episodes strung together per half-hour episode for Showtime. Greenblatt admitted he’s been a fan of the longtime Friends star for some time. The beefed up cast this season of names like Dan Bucatinsky, Courteney Cox, Tim Bagley, Selma Blair, Julia Louis-Dreyfus, Michael McDonald and Molly Shannon probably helped seal the deal.

Television pickups of web series have been an increasingly regular part of the landscape ever since Marshall Herskovitz’ Quarterlife saw its brief NBC run back in 2007. Since then a number of other series have originated online to later find TV offers come calling. Most of them however have had their share of recognizable TV actors already. Childrens Hospital starred Rob Corddry, Megan Mullally and David Wain (amongst others), during its single season online last year when it made the move to comedy cable network Adult Swim.

The natural question is which series are on the short list for TV pickups now? My bet for the front runner would be Illeana Douglas’ star-heavy Easy to Assemble, which even scored the Streamy Award win for Best Ensemble Cast this year. With its own Season 3 in the works after getting the greenlight from its primary backer IKEA, it has both the track record and the fan support to make the move across platforms.

That’s not to say that web series should be making the move to TV, just that there will no doubt be some interest from development execs facing fewer pilots to choose from. The idea of the web as a proving ground for concepts and talent is catching on in Hollywood. The term “backdoor pilot” is something I’m hearing more often by TV folks looking at the more popular web series fare. The real test will come if a truly internet-bred series, lacking any well-established TV stars, can find success on a medium that still doesn’t know what to make of this web notoriety.

MTV’s pickup of The CollegeHumor Show took web stars like Jake Hurwitz and Amir Blumenfeld in the living room, but the show so far doesn’t appear to be getting a second season. If Felicia Day’s popular gamer comedy The Guild, which is about to start shooting its fourth season, were to get a TV offer, it’s not clear what direction it would take. Day and her team, who have notoriously been proponents of retaining ownership of their creation, would probably not jump at skimpy offers. She did after all turn down over 20 offers for web sponsorship and distribution before teaming up with Microsoft and Sprint. With creative control in place online, a happy partner in Microsoft, and top billing as one of the most popular scripted web shows, it would have to be one heck of TV deal to give that up.