Alloy Entertainment’s grasp on the reigns of teen entertainment and culture is pretty well established at this point. Producing hit TV dramas Gossip Girl and The Vampire Diaries and films like Sisterhood of the Traveling Pants brings some glamour, but Alloy’s more potent prowess lies in its cross-platform storytelling arsenal. It helps of course when you own some of those platforms.

Storytellers these days often ruminate about blurring the lines between the entertainment platforms of television, film and new media, but few actually have the laboratory to play around with. Alloy’s foundation for all these stories rests in one of the oldest platforms around—print. Its publishing arm boasts over 50 titles that made The New York Times bestsellers list, with book series like Gossip Girl, The Clique, The A-List, The Sisterhood of the Traveling Pants, Private, The Luxe and Pretty Little Liars all taking on lives beyond their printed origins.

By most accounts, the 14 million views that Private has racked up so far are considered a success over at Alloy and for the show’s sponsors—Neutrogena and Johnson & Johnson. The teen novel series turned web drama was Alloy’s first major test of taking an audience from print to online series through its own channels. This was a model we’ve been eyeing for some time now as one of the best positioned to sync up the holy trinity of content, brand and distribution all in one place. Private received prime placement on Teen.com the hub of Alloy Media + Marketing’s growing digital network of web sites, which also includes Channel One and gURL.com, together drawing over 50 million unique vistors a month. Apparently, the experiment worked enough to take things up a notch. 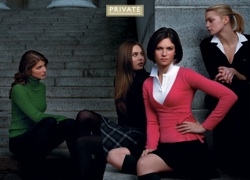 With the success of Private along with the earlier LG Mobile sponsored series Haute & Bothered, Alloy sees enough promise to take their online exploits further. The company this week announced a new digital division, going under the name Alloy Entertainment Digital, specifically tasked with creating web originals. Independent filmmaker Tripp Reed has been hired to run the division which will be based in Los Angeles.

Josh Bank, recently promoted from EVP to President (East Coast) of Alloy Entertainment, will oversee Reed and the new digital operation. Bank noted that AED plans to produce 4 to 6 original series per year with brand sponsor backing, similar to Private’s model, along with another 2 to 3 originals that aren’t brand driven. “We want to do some projects that aren’t branded,” said Bank, “where financing comes in different ways.”

Budgets for the digital series will still pale in comparison to the millions per episode of Gossip Girl, and Bank pointed out that one of the key skills that new digital head Reed brings to the table is his background in lower cost independent film. “We’re exctied about his independent ethos,” said Bank on his new hire, “and given that budgets are not huge in the digital space yet, it helps that he knows how to stretch a dollar.”

The properties developed in digital, like most all of Alloy’s projects, will still lean towards development across several platforms should an audience develop around them. “If it’s something that works and develops an audience, we want to sell it where and when we can,” said Bank.

In terms of what kind of material to expect from their ramp up in production, Bank suggested a fairly wide net they plan to cast. “Anything’s game,” added Bank. “We might have a book title that may not have found a home on TV or film, or an original piece that we haven’t gone out to the publishing world with yet.”

A handful of web projects are currently in development, none which were currently announced however. While it’s a safe bet that the bulk will fit into Alloy’s tightly curated teen girl demo, Bank did note that some of their brand clients have approached them about developing outside of the base—for example, a series built for 30-40 year-old women. That kind of project too might find a home at Alloy, given the track record and demand from satisfied sponsors. Bank said they wouldn’t shy away from such extensions—adding, “we feel like we have an expertise in storytelling.”