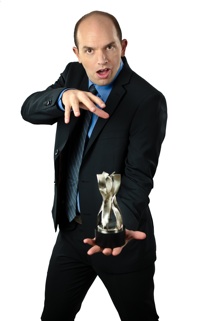 Today came the offical announcement that Paul Scheer has been tapped to host the 2nd Annual Streamy Awards on April 11, 2010. The rising actor comedian is well known to comedy fans as a one of the stars of sketch comedy show Human Giant which ran on MTV, alongside Aziz Ansari and Rob Huebel. He now stars in the hit FX comedy The League, which was just renewed for a second season, and on HBO’s new web-inspired Funny or Die Presents in a regular ‘Designated Driver’ segment.

Scheer will headline the live internet TV broadcast of the ceremony from the Orpheum Theater in Los Angeles, airing at 5:30 PM (PT) at Streamys.org, Mashable.com and Ustream. His distinctive brand of comedy

“Ever since I was a child I dreamed of hosting the Streamy Awards,” Sheer mused. “Oh, and by the way, when I was a child I had a time machine that let me see into the future.”

He’s also no stranger to internet—Scheer is a regular staple on Funny or Die—and just last month tapped into his vast network of comedians to organize a charity benefit for Haiti, dubbed A Night of 140 Tweets, a tweet-a-thon that brought together 140 comics to read their best tweets live.

While the Streamys ceremony itself is invitation only, a limited number of tickets will available for web series fans. Interested people can add their names to the Streamys ticket waiting list to find out more.

To brush everyone up on Scheer’s many web exploits we’ve included a little sampler of his wares: