‘We Are With the Band’: Hipster Comedy Funded Through Kickstarter 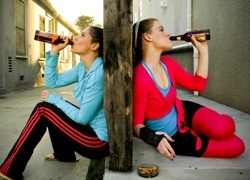 Due out in early April, We Are With the Band follows internet blogger Elle and recently unemployed Marci as they dive bottle-first into the Silverlake hipster scene. The series was conceived and produced by Vivian Kerr and Heleya de Barros as an outlet for their frustration at not finding quality roles for women in Hollywood. “I know Heleya’s strengths as an actor and I thought I could write something that would showcase her,” said Kerr. “I was watching a lot of Peep Show, a British comedy about two male best friends, and I was wondering what a female equivalent of that show would be like. LA has such rich fodder for parody and hipsters are such an easy target. It sort of wrote itself.”

Barros continued, “WAWTB is about finding yourself, finding balance in your life. It’s about being done with college, but still having no direction. Having dreams but not knowing exactly how to fulfill them.”

The show heavily centers around music, with LA band Open Buffet composing music specifically for the series. The show’s director is Scott Brown, who is nominated for a Best Director Streamy for his work on Blue Movies. “The show is completely self-produced,” explained Kerr. “We created DK Productions as our production banner, but we raised the money to make the series entirely on our own through (fundraising platform) Kickstarter and private donations. We wanted to make the show as true to our vision as possible and were committed to self-producing from the start.”

“Our goal is to find an online distribution partner,” continued Kerr. “We’d love to work with people who believe in the show as much as we do! The first season is eight episodes total, with each episode running about 3-5 minutes. We should be set to premiere the first episode on April 5th on our website. We also plan to enter it in festivals. We would absolutely make a second season but would probably want a producing partner next time around. We’ve already talked about some storylines. There are a lot of directions it could go.”