‘Contagion’ Takes the Mashup to an Infectious Level 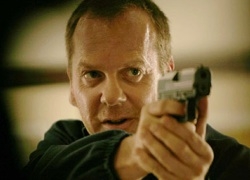 This isn’t your average “I ripped Rick Astley’s “Never Gonna Give You Up” off YouTube (rickroll) and then mixed in some clips of Captain Picard saying “make it so” on a loop” mashup. Contagion explores a world in which Jack Bauer is investigating the murder of Bella Swan by Blade while tying to get Mulder and Scully to help him before the Resident Evil zombies attack…but they do, leaving him no choice but to go pick up the Winchester brothers from Supernatural.

Created by Canadian television director and editor Ray Holycross, the series originally began as a way for him to hone his editing skills in his spare time. He had planned to release an episode each week for 2 months, beginning in December. And just in case anyone tries to call foul on the fact that he’s using copywritten material, Holycross makes sure to post information on Section 107 of the Copyright Act 1976 on the series YouTube account, also stating, “I do NOT make any money on this. Copyright is to the rightful owners, and this was for fun and not to make any money or profit at all.”

Unfortunately, Holycross had to take a hiatus after episode 3. However, to make it up to those chomping at the bit for more, he recently released a teaser trailer (below) for the final three parts of the series, each running 10 minutes, slated to be released at the end of March.

What will happen in this 30 minutes of the ultimate geekerific television and movie universe showdown? Will Blade take down Bauer before the zombies do? Will the Winchester brothers end up in a love triangle with Scully? Will anyone care that Edward Cullen was killed in the first 30 seconds of episode 1? Tune in March 29th to find out.