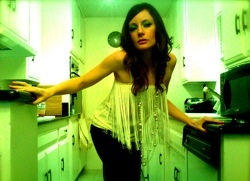 A Comicbook Orange debuted Season 5 today (season 5!), with none other than Rick Remender getting honors for the first episode back. My how time flies, it was just yesterday that Season 3 pranced across our monitors. This season Orange creators Casey McKinnon (pictured right) and Rudy Jahchan have an excellent line up of guests for this new season, including Zack Whedon, Felicia Day, Brea Grant (Heroes), Bryan Lee O’Malley. [A Comicbook Orange]

Qik, the live online video platform popular amongst iPhone 3GS users, launched a private beta of its new live streaming desktop app, which amongst other things allows for some basci editing of live video streams. So you can finally trim those awkward intros, and get to the good stuff when sharing the video clips. [Qik]

MSN premiered Ultradome this week on its Parallel Universe sci-fi site from creator, and Heroes star, Milo Ventimiglia. Fitting with its geek culture face-offs, episode one (below) delivers a high-tech battle between Lord of the Rings and Star Wars. [Parallel Universe]

Apple unveiled the iPad today, its much anticipated new tablet computer today, which isn’t really news at all unless you were stuck shooting on location in Pyongyang (which has killer tax credits right now). Notably missing from the new device was a camera or any support for Adobe Flash video. So in terms of web video content, it’s not that revolutionary, with Apple still preferring users head to iTunes and YouTube for video viewing. There’s plenty of coverage around the web today, check with All Top for a round up. Also check out Mad TV’s gut-bustingly prescient iPad skit from 2007 (below). [YouTube]

And more A Comicbook Orange, as they themselves became the interviewees on a new episode (below) of The Web.Files that dropped today. Host Kristyn Burtt is armed with cupcakes for the sit down with Casey and Rudy, who take it back old-school to talk Galacticast, their first web series, and new-school to talk what makes A Comicbook Orange tick these days. (Hint: It has something to do with director Josh Allard). [The Web.Files]