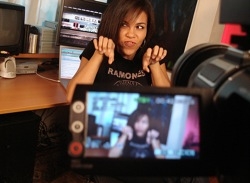 After much anticipation tonight is the night. We have none other than internationally popular web series EPIC FU creators Zadi Diaz and Steve Woolf in the house for the re-launch of their longrunning show and the launch of some brand new original series.

Couldn’t make it in person the Tubefilter Hollywood Web Television Meetup tonight? That’s okay, once again we’ve teamed up with Stickam.com to stream the event LIVE online. (If you can’t view the player above, you can head to stickam.com/tubefilter) Join in the chat room and ask questions for Zadi and Steve that you have, our moderator will try to get as many of them read at the Meetup as we have time for.

If you’re one of the lucky ones heading to the Meetup be sure to read: 6 Ways To Rock The Tubefilter Web TV Meetup! (Without Cheating)

For the January edition of the Hollywood Web Television Meetup, we are proud to present a very special evening with popular internet culture show EPIC FU as they launch the new EPIC FU network. Join us as we screen the premiere of one of the web’s most revered and award-winning series, followed by an intimate discussion with its creators—Zadi Diaz and Steve Woolf. The evening is sponsored by HP and Intel, who will be onhand to give away a free HP Envy laptop and a free HP DreamScreen for Meetup attendees. This is definitely a night not to be missed!

For over three years, EPIC FU has been the premiere web show about emerging culture, covering the people and ideas leading the Internet revolution. Countless artists covered on the show have gone on to mainstream success, positioning EPIC FU as a top tastemaker and one of the pioneering examples of building a global community around an entertainment property. With 150+ episodes and 35 million views from over 100 countries, EPIC FU returns for its sixth season on January 21 after a long hiatus. With this iteration, the venerable weekly show transforms into multiple shows focused on how web culture affects music and film, with a new blog network featuring daily fresh content. EPIC FU has won two Webby Awards and a Streamy Award, and remains independently owned and produced by Zadi Diaz and Steve Woolf.

Full video, recap and photos of the Meetup will be up here tomorrow. Thanks again to our sponsors HP and Intel for helping make this event come to life and supporting the growing web television community!