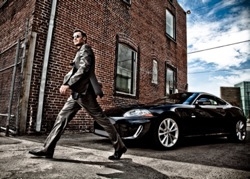 We had heard rumors that they might do it, including some at the last Tubefilter Meetup, and sure enough they have. Sony has released three episodes of their sexy action romp The Bannen Way today just in time to qualify for this year’s Streamy Awards. While the series doesn’t officially bow until January 6th, it’s a move reminiscent of film studios doing a quiet “awards run” New York and Los Angeles to get it on the books for the year.

Clocking in at a brisk 7 minutes each, the first three eps (above and below) introduce us to the nooky drenched life of Neal Bannen (Mark Gantt), a gambling con man with a penchant for letting his love for the ladies spill into his work. We learn that his grandfather Bannen’s dated wisdom guides his criminal life through a set of ‘rules’ that give the show its name, The Bannen Way. Through some fast cut rewinds, we catch a glimpse of what’s to come, setting up Bannen’s 150k debt to a mobster name Sonny Carr as a main plot point.

And it didn’t take long, just a few minutes really, for the show (and Neal) to get its shag count up to one with a bout with the steaming storage room manager (Briana Lane). Somehow it managed to avoid steering into late night Cinemax territory despite the rather brief pre-shag setup. We also meet street thief Madison (Vanessa Marcil), who looks to be Bannen’s main squeeze. Without spoiling the rest, I’ll just say that Michael Ironside as police chief knows Bannen all too well, as does Neal’s mob boss uncle Mr B. (Robert Forster).

Whether it will be enough to woo voters for the Streamys remains to be seen.  But with the more extensive release next week, there’s no question it will be getting plenty of attention—from us included. Judge for yourself…