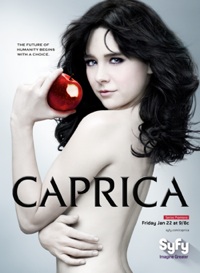 Battelstar Galactica’s follow up prequel series Caprica has pushed out their full pilot online (above) before its series premiere Jan 22nd on SyFy, and it reminds us that this may not be the only time the show flirts with web viewers. Streamy Award winner Jane Espenson is behind the series, along with fellow Battlestar writer Ronald Moore.

Tubefilter’s Drew Baldwin spoke with creator and Executive Producer David Eick ealier this year at the Caprica premiere screening at PaleyFest09, and asked whether we can expect a Caprica web series, he said, “it’s a possibility.”

Arguably, this isn’t much to go on. It’s probably just a good excuse to show our readers the Caprica extended 90-minute pilot. Battlestar did release a well-received web companion series—The Face of the Enemy—which picked up a Streamy last year, so this wouldn’t be new ground for this group. We do hear that SyFy is looking to build out more web-only series for its site, and this might be a natural fit. Alessandra Torresani, Eric Stoltz and Esai Morales star in the TV series, and who knows if they would be involved in the companion web series.