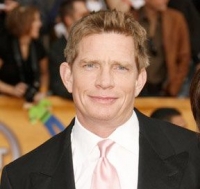 Thomas Haden Church, former Wings regular and breakout star of 2004 film Sideways, is going after the one meidum he hasn’t dabbled in yet—the internet. The 49 year-old Oscar-nominated actor has signed on to star in FEARnet’s new original web series Zombie Roadkill which is set for a Spring 2010 release on the site and through its video on demand network. Henry Gayden wrote the script for the six episode horror-comedy which David Green will direct.

It’s the fourth project made for FEARnet from Sam Raimi’s Ghost House Pictures, which had crafted 30 Days of Night: Blood Trails and 30 Days of Night: Dust to Dust, and Devil’s Trade for the network. Aaron Lam from Ghost House will produce the series. Also announced joining the cast is teen David Dorfman known as the little boy from The Ring flicks.

Zombie Roadkill centers around a group of college kids as they are driving on an unfamiliar road. Everything seems fit for a road trip to the lake but, when the group accidentally runs over an unsuspecting squirrel, they quickly realize there will be a price to pay. The cursed road brings the zombie squirrel back to life to haunt the kids. After the kids crash and everyone is injured except the younger brother, he is forced to set out on a journey to defeat the ancient curse and save his brother and friends before it is too late.

Just like FEARnet’s latest series Fear Clinic, which reportedly has been doing quite well this fall, Roadkill will be visual effects heavy. Quantum FX, known for their work on Watchmen and Where The Wild Things Are, are being brought on to handle creature effects.