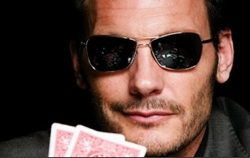 It’s funny how The Bannen Way has come full circle, so to speak. The long-awaited action series after all started its buzz-filled journey from spec indie to Sony-backed studio project with just a flashy trailer over a year ago. Of course the full series wasn’t actually shot back then, so the release of the actual HD trailer on Crackle.com this week is getting quite a stir going.

For LA-based folks, or those heading to the city, they will get an exclusive first hand look at the new series with never-before-seen footage. That, and we have The Bannen Way creators Jesse Warren and Mark Gantt (who also stars as con-man Neal Bannen) dishing on what “Going Pro” really means. Also speaking is the man who signs the deals over at Crackle, Sony SVP Eric Berger. RSVP for Tubefilter’s Hollywood Web TV Meetup early, since this one is sure to sell out again.