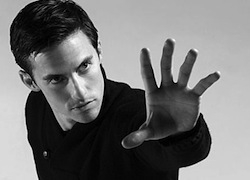 Milo Ventimiglia wants to further intellectual debate for the Comic-Con crowd. Back in May, the Heroes‘ hotshot told us about teaming up with Agility Studios for the web series Ultradome. The program pits comic and sci-fi fanboys against one another in a virtual octagon, where two individuals debate timeless topics like, “Would Harry Potter or Neo win in a fight?” and “Who’s the cooler vampire? Count Chocula or Lestat?”

Last time we spoke with Ventimiglia, Ultradome was without a release date or distribution partner. Now that’s changed. MSN tell us they recently struck a deal to distribute the series and are shooting for a late-January premiere.

Joe Michaels, Senior Director at MSN Business Development explained to me why picking up Ultradome made sense:

Earlier in 2009, we launched a website called Parallel Universe. The site came out of a successful experiment covering Comic-Con. We quickly realized that the Comic-Con audience is on our network, so we created Parallel Universe to essentially provide Comic-Con content year round. Mostly, the site aggregates content from other sources, but it occurred to us that there were some original web series that could fit really well.

We experimented with The Guild and it was a great fit, so when Agility came to us with Ultradome the editorial team for Parallel Universe said, “Perfect! It’s a 100% bullseye.”

Both Michaels and Agility Studios CEO, Scott Ehrlich confirmed an initial order of Ultradome episodes, but were quiet on exactly how many. They also wouldn’t comment on any celebrity appearances, though considering Ventimiglia stars in the pilot and is one of the executive producers, I wouldn’t be surprised to see cameos from more heroes and villains (and maybe even some Gilmore Girls).