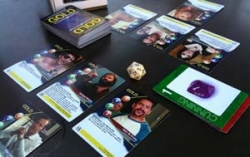 From the moment table-top RPG comedy series GOLD launched, we knew they were sitting on the ultimate interactive merch play—its own custom tabletop game, perhaps even the very same game that its heroes play throughout the series. We already thought their t-shirts were cool, but this is the release we’ve been waiting on.

This week they released the GOLD Character Card Game (CCG), a relatively easy to pick up team battle style card game for two to four players.

“Initially there was some talk about a standalone ‘Goblins & Gold’ RPG,” wrote creator David Nett, “but since there are already so many tremendous old and new-school RPG systems out there that we love to play, and since we’re novices at game design, we quickly discarded that idea.”

The indie series continues to push forward after wrapping its praised first season. Following the mantra that you can’t stop seeking out new fans, the creators made the rounds of the RPG world hitting up GenCon Indy, where they picked up some attention. More recently, they headed to Manhattan as an official selection at the New York Television Festival (NYTVF) in September.

As for next steps, while prepping a second season, the GOLD crew is raising funds for a Season 1 DVD using new crowdsource fundraising service, Kickstarter. They aim to pull off for a modest $2500 to cover “some tweaking/cleaning to both color and sound to meet standards which are much less forgiving on DVD than on the web.”