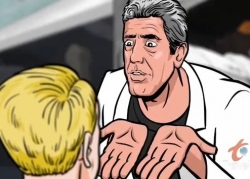 Anthony Bourdain tries really hard. That’s good and bad. If you read Kitchen Confidential – the New York Times bestseller published in 2000 that made “Bourdain” a buzzword around the dining room table of any self-respecting foodie – you know the extent of his labors. The book tells how the 1978 CIA graduate was able to transform a career as a drug- and alcohol-abusing prep cook into that of a chef par excellence, commanding the kitchens inside some of New York’s top culinary destinations. Its ingredients aren’t the rags to riches metamorphoses of which biopics are made, but it’s a pretty sweet story. And Bourdain overseasons it.

Kitchen Confidential is peppered with superfluous words better suited for George Carlin routines, constant references to illicit substances (I had to flip through about three pages of my copy before finding one of many prime examples: “We threw ourselves into the task with near-fanatical once-in-a-lifetime zeal and prodigious amounts of cocaine and amphetamines”), and uncensored potshots at popular culture’s culinary elite.

Bourdain is desperate for you to think of him as awesome Uncle Tony, exposing secrets from his “adventures in the culinary underbelly” and telling tales that everyone in the industry knows, but is too afraid to say out loud. The problem is, he’s so heavy on the “cool” the story loses a lot of its flavor.

And that’s the exact same way I feel about  newly announced, animated web series, Alternate Universe. The six-part online companion to the Travel Channel’s No Reservations is set to drop in 2010, but you can watch an early sneak peak here.

Alternate Universe seems like a not-so-subtle attempt for Bourdain to reaffirm his crazy, hip, bad-ass image while pushing his persona to new limits. The marketing materials and the trailer bill the show as an invitation inside Tony’s head to see “his twisted imagination, mocking himself and others along the way,” the animation style screams Adult Swim, and the “I’m a rebel because I call out other chefs on their $@#%” motif runs rampant (at least in the preview). Mix all that together and the series is just a newfangled attempt for Bourdain to get in with the in-crowd. To me, it smells contrived.

On the other hand, the fact that Bourdain has played host to two popular shows on cable television (A Cook’s Tour by Food Network and the aforementioned No Reservations on the Travel Channel) says that my tastes are in the minority. Come 2010, there will be plenty of people who are going to eat this series up.