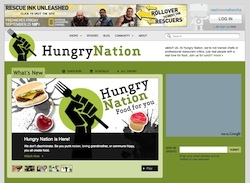 Next New Networks rolled out its latest online network today, Hungry Nation, finally giving hipster foodie web series a roof to call home. We’ve written before how Next New Networks loves to own strong verticals with its networks—Indy Mogul (filmmaking and movies), Threadbanger (DIY fashion), Barely Politcial (news/politics)—and the move into food is natural fit with the recent boom in nom-loving web shows.

Three web series are in the initial lineup, including one of our favorites, street food vendor stalker VendrTV that we reported had inked a deal with NNN earlier this summer.  The other two are Working Class Foodies, a brother-sister team that scour local food markets to score meals for $10 or less, and 12 Second Cocktails, which holds true to its name with super-fast drink recipes. Five total series are planned to be on the network by the end of the year.

This follows in what appears to be NNN’s strategy of building non-scripted shows around prominent web personalities, like VendrTV’s Daniel Delaney. “With shows like VendrTV and Working Class Foodies, the network is set to usher in a new class of food TV shows and stars,” said CEO Lance Powell. “It’s the kind of talent we sought to work with when we created Next New Networks, and we look forward to working with more great talent in the future.”

For now, the shows on the network remain independently produced, part of a new agreement they are calling the Next New Producer’s Program. To be sure, it looks like a form of selective distribution deal with resource commitments to help land larger sponsors and help grow the audience for the indie web series. So far no major sponsors have been announced, though for the network that just cleared 600 million total views, there may be some brand interest coming soon for the new vertical.

There’s a natural comparison to cable network The Food Network (owned by Scripps Networks), which itself has recently made the move into the original web content game with the launch of Food2.com and a slate of somewhat similar web shows like $12 Challenge and The Amateur Gourmet. Though at first take, it seems the indie hipster series on Hungry Nation carry stronger personalities and better individual branding.