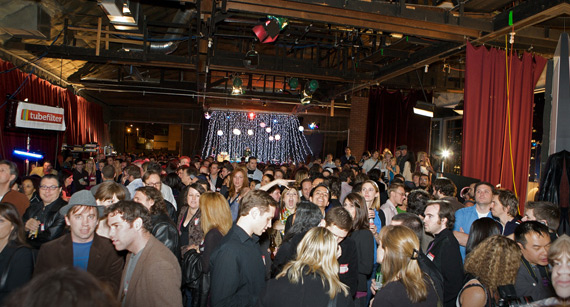 Let’s face it, summer is finally over. Those long days of daylight will now begin to slip away, the air will turn crisp, and before you know it your clock will “fall back” and you’ll find yourself wandering around in the dark at 6:00pm like some extra from I Am Legend. But fear not, you undead nightwalker! This October 19, we have a special treat for you: an extra special Tubefilter Hollywood Web Television Meetup! What could be a better kickoff for the first day of Digital Hollywood and the Prospective Membership Meeting of the International Academy of Web Television?

Tubefilter Hollywood Web Television Meetup is proud to present Going LIVE!, an in-depth look at what it takes to pull off a live television show on the web. With the proliferation of live content online—thanks to platforms like UStream, Justin.tv, Stickam, and Livestream, it’s no wonder so many web television creators are producing high-quality live content online. Live broadcasts are an event in themselves, which provide a level of interactivity, buzz, and community building that you just can’t get from on-demand programming. We’ve pulled together a group of leading innovators in the live web television in an event you don’t want to miss.

This month we’re back at Busby’s East but we’re breaking up the format with a limited-seating panel starting promptly at 7:30 pm, followed by our infamous networking mixer, which starts at 8:45 pm. Don’t miss the great conversations and a very exciting announcement from the Tubefilter Team. We really want to tell you right now, but we can’t!

We have some fantastic panelists lined up for this event, so get your tickets now to avoid beating yourself up later when they are sold out. Check them out:

Hailey Bright, Co-Host, Coin-Op TV Live: Hailey Bright is the Associate Producer and Co-Host of Coin-Op TV Live, a weekly talk show about the video game industry, people, and events. Hailey also recently hosted for Machinima.com‘s Coverage of the Tokyo Game Show, Modeled for Spiderman Comics, and is currently launching her new production company, Bright Idea Productions, which will focus around many elements of live streaming. An actress and model, Hailey was named IGN.com’s ‘Babe of the Day’ and one of the ‘Hottest Women of the Web’ by G4tv. Hailey lives and works in Los Angeles.

Brian Gramo, Founder theStream.tv: The creator of Filmnut, The Game Show, and Can I Nail It? is also the founder of theStream.tv. Brian already had four live shows airing each week out of his apartment in Santa Monica in 2006. By January 2007, Brian moved theStream.tv into its second studio and continued to add additional interactive shows to the programming lineup that focused on various niche topics. Filmnut was the first of these shows to launch in the new space. theStream.tv has since upgraded to an even larger facility and airs over 10 live shows each week, has served more than 10 million video feeds since launch and continues to develop new shows that take advantage of its unique, interactive style.

Tyler Crowley, Executive Producer, Mahalo Daily: Tyler Crowley is the Director of Corporate Development, Marketing and Strategy at Mahalo, where he additionally functions as the Executive Producer of Mahahlo Daily, This Week in Startups with Jason Calacanis, Kevin Pollak’s Chat Show and others. Prior to joining Mahalo, Tyler traded technology and petroleum services stocks from the comfort of the beaches in Thailand and Costa Rica. In 2003 Tyler started a fashion design company which sold internationally in over 20 countries and to several national department stores domestically.

Drew Baldwin, Producer, The Streamy Awards: Drew Baldwin is a co-creator and producer of the 1st Annual Streamy Awards, the first live, multi-camera awards show broadcast to a global online audience. He is a Co-founder of Tubefilter, the leading authority in the web television space. Tubefilter exhaustively covers the industry, the creators, and the stars of this fast-paced, emerging entertainment market. Drew is also a co-founder of the International Academy of Web Television, and serves as the Chair of the New Media Council for the Caucus for Writers, Producers, and Directors.

Please make sure to RSVP. You can also Join our Facebook Group and get the details on Upcoming. If you want to be notified of future events via email, please join the Hollywood Web TV Meetup Newsletter.
Follow the Meetup on Twitter